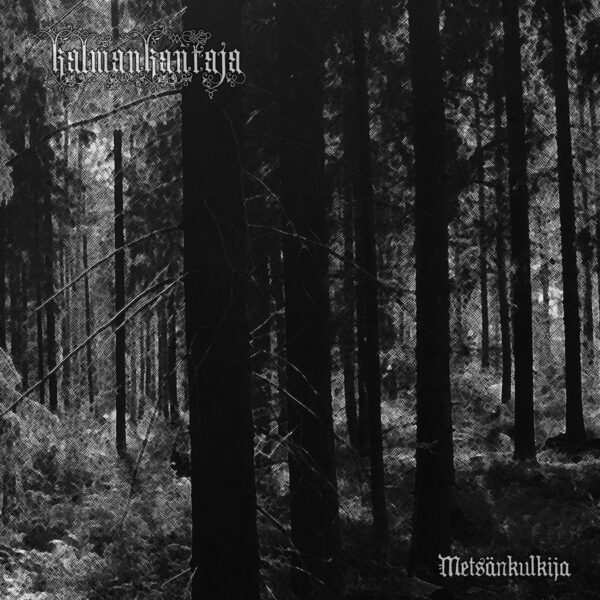 Since forming in 2011, the depressive duo from Hyvinkää have been busy with various album, EP and other releases, and have just put out their seventh full-length “Muinainen” in four years at this time of writing. On this recording, the emphasis is on long sprawling trance-inducing rain-shower BM, slow and graceful in pace, and with just enough death-rattle vocal to nudge the music along. The overall impression is of an ocean of acid-spiked tremolo guitar noise, bulked up with slumbering bass and percussion, rising and rolling, advancing slowly but surely of its own volition, steadily eroding all defences put up against it. The crab voices sing just as slowly, with the certainty that everything must succumb to the force they accompany. The music is powerful and there is a suggestion that it has more force than it chooses to display on this recording.

Tracks 1 and 2, “Hautasaattue” and “Yön Alttarilla / Overnight at the altar” respectively, are the two major pieces: they simmer away, taking the listener on long dark voyages into an inner universe. Despite their length, both clocking in at over 16 minutes, they never appear to be confused or lacking in direction: the spirit within them sails wherever it will and the entranced listener is content to go for the ride. Many will find these tracks monotonous, although there are passages of distinct riff loops, and only those people who are open to being transported into another alien world by surging heavy waves of ocean BM should embark on this voyage with Kalmankantaja.

There’s not that much difference between the first two pieces though the second sizzles and crackles more and the vocal sounds even more crumbly as if with the second track we have entered into a deeper level of whatever hell the band is taking us through. The guitars are more oily in sound and hypnotic in effect, and the churning grind seems even more powerful. The muted synth percussion isn’t something to shout home about but it serves its purpose adequately. Late in the second track, a chorus of clean-toned voices and an equally clean lead guitar melody take control of the music and lead it into an ever more doleful direction.

Final track “Mustan Usvan Takana” is an all-instrumental space ambient piece dominated by background wash, blinking cold tone and heavy-handed drone. This is definitely one track whose length could have been cut down by half without losing much in meaning. Any weaknesses in music composition are most glaring here: the music is flat and lacking in the volume dynamics that could have made it easier on the ear if not livelier. The music ends a bit strangely as if the musicians weren’t quite sure what to do about it.

The problems with the third all-ambient track might suggest the band needs to spend more time polishing their song composition skills and less on releasing product. While I like the long immersive  BM pieces, I concede they are an easy way to avoid dealing with music structure shortfalls of the kind just mentioned. I suspect the band has a lot of work ahead in striving for a more polished style of hypnotic BM immersion.