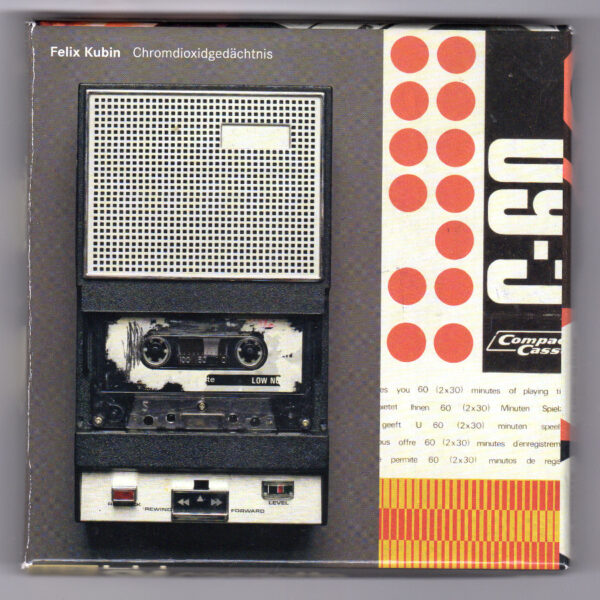 Felix Kubin has produced a witty and self-aware package of retro-culture with the Chromodioxgedächtnis (GAGARIN RECORDS GR 2027) box set, a release containing one CD of music and sound art, a cassette, and a rather lavish colour booklet insert – all in the service of creating a homage to the humble cassette tape and its place in 20th century music and popular culture. Even the music compositions get in on the act, emphasising the “cassette-ness” of the medium and the playback mechanism by including sounds of a tape recorder being turned on and off, or use of fast-forward, pause and stop buttons, these sounds often topping and tailing the composition itself.

In his accompanying essay, Kubin confirms he wishes to call attention to the physical artefacts (some might prefer to call them “defects”) of this very tangible medium, and celebrate them with a rear-guard action that reverses the unstoppable trend toward “perfection”, in the form of digital clarity, noise reduction, and all the other “improvements” in contemporary sound recording and delivery which Kubin would, presumably, regard as significant losses for the heart, soul and meaning of the music and sound itself. He places the cassette in the context of home copying, amateur recording, and bootleg tapes, stressing its importance as “the people’s copying machine”, a liberating democratic mechanism. 1 Many of the above arguments are advanced by the booklet pictures, where photographs of Kubin’s own cassette tapes of his 1980s work nestle alongside magazine adverts for technology and various brands of cassette, even including an image of the famous “Home Taping Is Killing Music” image which rose to prominence in the mid-1980s when paranoid record companies feared that “the people’s copying machine” would lead to a reduction in sales of vinyl. (They should only know…!!)

On the album itself, Kubin forsakes his talent for producing watertight elektro-pop arrangements in favour of a rough-and-ready approach to avant-garde composition, electro-acoustic mayhem, and increasingly barmy arrangements through use of collage, samples, tape loops, and malarkeying around with tape itself, which he uses both as a paintbox and as a box of coloured modelling clay. He’s aided in this by Ninon Gloger and Steve Heather, guest musicians whose contributions were passed through Kubin’s hands, apparently involving extensive reworking through additional cassette recorders and players, to produce “a complex edifice of overdubs”, thus embedding the conceptual elements of this release within the work itself. The results are a delight, not especially loud or noisy, and with a patina of grime and lo-fi distortion of the sort that you only ever get with faulty and decaying magnetic tape, where you can almost hear what I call the “grain of the oxide”. Taken as a whole, the main CD is a bewildering and exhilarating collage of ideas, sounds music and voices jumbled together in an impossible world of kaleidoscopic images.

As to the cassette tape portion of the release, I didn’t actually receive a cassette but instead a CDR burn of the content supplied by the promoter, which sadly doesn’t play on my computer. I think this is not only ironic but rather fitting; it’s still possible for me to listen to cassette tapes which I bought in the 1970s (I have two players at home), yet a CDR holding digital files created less than a year ago is already pretty much obsolete 2. You of course will fare better dear listener when you purchase this release. The cassette contains a half hour of “sounds from the archive” and an interview with Wim Langenhoff, an artist who used to work for Philips. A lovely release. Now I must go on eBay to see if I can purchase an old 1970s solid-state cassette player similar to the one pictured on the box. From October 2014.