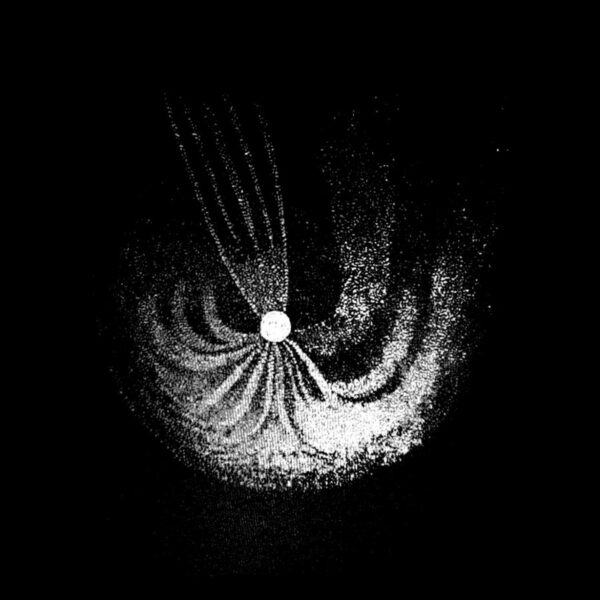 Another sumptuous vinyl package from Arizona label King Of The Monsters, who we last noted with their release of the split LP by Suffering Luna and Suffer The Storm, plus the sombre self-titled album by Gog. While neither of those albums quite gelled for this listener, I’m planning to award a full five “golden pentagons” to The Silver Head, which is all the work of Reuben Sawyer, a draughtsman whose painstaking pen-and-ink drawings are dazzling in detail; if you wish to take a peep, some images might be found by Googling his nom de plume, Rainbath Visual.

What I like about his music here is the simplicity; the single-minded pursuit of a concise, pared-down perfection to express an idea, which in final form is executed with tremendous precision in the playing – especially the guitars – and a hypnotic monotony in the vocals, and the drumming. As Blood Bright Star, Reuben confirms his intention is to blend death-metal with Krautrock to arrive at something he calls “Death Motorik”, and the results are indeed like a pared-down deep-frozen version of La Düsseldorf as fronted by the evil two-headed mutation offspring of Nick Cave and Ian Curtis.

Like Gog’s Michael Bjella, Sawyer also has a Michael Gira fixation which he wants to work out of his system like so much snake venom, but with every note on this unfussy record he is also carving out a niche for his own personal voice to flourish. No interest is exhibited in flailing guitars, excessive distortion, or even in self-gratifying solos; the vocals neither screech nor rant, but instead patiently unfold their chilling message of doom. All of this is performed as if by stopwatch to an unfailing rhythm section, swaying in time to the compelling movement of 18 merciless cobras which have suddenly appeared on the floor.

When I read the pretentious press release for this one, with its references to “dreams, revelations and trance states”, “Qabalistic lore and alchemical symbolism”, and something that “guides its star through the body of the infinite”, I was primed to expect some unholy blend of Jung, Maya Deren, Z’EV, and The Dead C, but I suppose a little rhetoric is permissible under the circumstances. From 13th August 2014, pressed in clear / silver vinyl, and recommended.