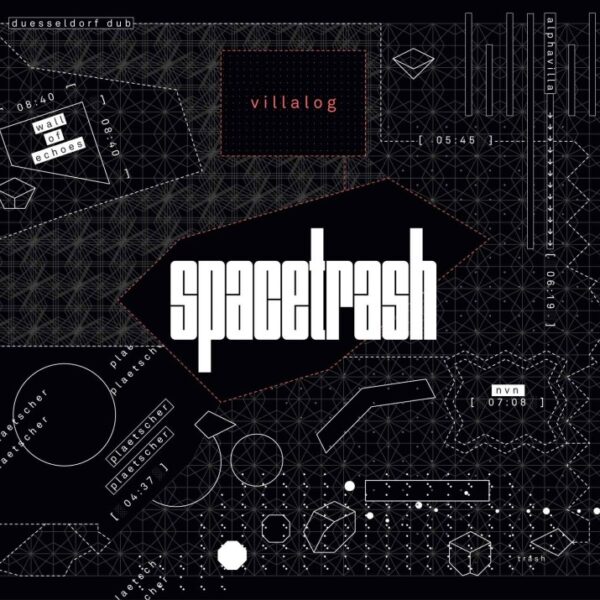 Apparently there aren’t enough La Düsseldorf records in the world, so the Austrian band Spacetrash have made a new one called Villalog (KLANGBAD 67)…their opening cut ‘Dusseldorf Dub’ admits to everything as soon as you slot the CD in, noting with one eye that Hans Joachim Irmler of Faust was the co-producer and that some recording took place at the Faust studios. This opener is a near-perfect forgery of everything Klaus and Thomas Dinger stood for, and is bound to appeal to all any Krautrock-hungry fans. After that slice of pastiche, the Spacetrash trio start to flex their own feathered wings a little and deliver track after track of very competent beat-heavy techno-inspired contemporary electronic rock, with precision guitars, electronics, synths and drumming, and a flair for studio effects, creating a whole package that wows the listener with its sumptuous, polished production.

Krautrock isn’t the only thing they pastiche, apparently, as ‘Orange Sunshine’ contains some rather saccharine wah-wahed guitar licks set to the same ‘motorik’ beat and yet still emerges as psychedelia-lite. The band (and the label) freely own their allegiance to Krautrock and psychedelic musics both past and present, and if they could be said to have a formula for their performances, it might involve endless improvised guitar licks set to a relentless disco beat. This is their fourth album; they impressed Hans Joachim Irmler at the 2010 Klangbad festival, and he invited them to record at his studio. I’m going to keep this one for a while as it does have some entertaining and engaging moments, but equally I find myself distrustful of its rather dry and bloodless approach; the musicians, while highly accomplished, feel more like well-oiled automatons rather than breathing human beings who might break into a sweat, and the whole thing comes off as one shade too “perfect” to be mistaken for actual rock music. From 23rd October 2014.