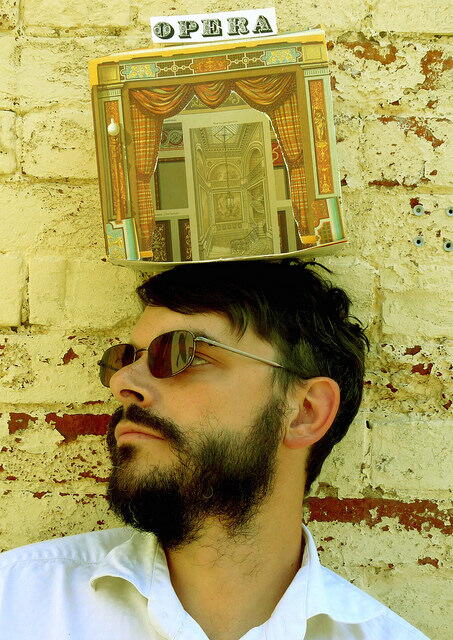 Last night we went to the Arcola Theatre where we saw Gala, an unusual operetta devised and written by Ergo Phizmiz, our favourite UK polymath of song and music who may be known to some of you through his collaborations with People Like Us, but he’s also an uncategorisable genius who has managed to mould his eccentricity, preoccupations, and other tics into entertaining and user-friendly forms. Gala is a short piece about Salvador Dali’s wife, a fantasy snapshot extrapolated from a few known facts about the celebrity lifestyle enjoyed by this rather – erm – “colourful” character in the 1970s. As presented in Ergo’s vignette, Gala was besotted by the young singer who starred in Jesus Christ Superstar (a tacky hit show on Broadway at the time) and invited him to their fashionable soirees in the Dalis’ New York apartment…and this becomes the cue for a lively portrait of decadence and weirdness, enriched with pervy sex. How can it miss?

Thea Martin played Gala as a brilliantly imperious character, attempting to maintain her own sense of self-importance even as the lifestyle of the Dalis is in decline – as shown by the figure of Dali himself, played by Jeremy Court, a burnt-out case confined to a wheelchair throughout the whole show. I liked the way Thea Martin would fly off the handle at key moments (e.g. shouting at the maidservant, played by Natalie Morgan) to suggest she’s barely in control of the situation, and almost a slave to her own lust. In my ideal world, Gala would have been played by a young Kate Bush – the character is not far from the half-mad impulsive and destructive characters from such songs as ‘Baboushka’ or ‘The Wedding List’.

Adam Dindorf played the Jesus Christ Superstar character with just the right note of egotism and unearned sense of entitlement, further highlighting Gala’s own insecurity. Dindorf’s singing wasn’t note-perfect, but more importantly he projects to the audience well, enlisting sympathy from the front rows. His “back story”, as explained by Ergo in a short preamble, is that Gala made numerous doomed attempts to turn this person into a famous rock star, despite his lack of talent; almost like an inverted version of The X Factor before the fact. Needless to say the character turns out to be on the make, and Dindorf’s stage craft is flawless when he writes himself a cheque from the Dali account and swiftly absconds.

The erotic affair is executed on stage with a singular dramatic coup. As Gala and Jesus Christ Superstar couple under a furry rug (the real-life Dali woulda loved that Freudian symbol), at the same moment the wheelchair-bound Dali is serviced by the unwilling maidservant who dons a black glove to apply hand relief to the old man under his blanket. Two climaxes are reached simultaneously on stage, through song and vocals, and it’s a moment that’s triumphant, hilarious (Dali’s curled-toe slippers suddenly appearing from under his blanket as his excitement mounts) and deeply poignant. The latter, mainly because the deluded Gala’s apparently unable to see how she’s being conned, and also underscored by Dali’s rather sad solo speech about how he tried to make his every waking moment into an erotic one. Jeremy Court’s triumph has been to convey something of the faded grandeur of Dali while performing under highly restrictive conditions. On the other hand, one acting lesson I do remember is “always USE your chair”, which presumably applies to wheelchairs too. A mere raise of the head towards the standard lamp, with the accompaniment of Spanish flamenco chords from the piano, gives us a glimpse of the former haughtiness of the Dali of the 1920s.

Did I mention the whole play is done in song? Ergo Phizmiz’s conceptualisation has been to present the work as an updated Gilbert and Sullivan operetta, playing the music to his own songs as the pianist live on stage. I think the G&S comparison is apt if we remember that Ergo once contributed to Radio Boredcast (a conceptual sound art event organised by Vicki Bennett) by reciting and singing several of these operettas entirely from memory. He didn’t need any sheet music tonight either, and played the whole score without a break. The other moment that reminded me of G&S was the appearance of the Dali Courtiers – the sycophants and arse-lickers, as Ergo described them – who attended these New York parties just to fawn and swoon over Gala’s antics. When these five freaks made their entrance and started singing, the whole production just took off like a sky-rocket. A shame this was 10 minutes before the end, though; if G&S had been writing this, this chorus would have appeared right at the start to warm the audience up, like the “gentlemen of Japan” in The Mikado.

The sycophants’ delighted grins soon turn to disgust when…but I won’t reveal the play’s twist ending, in case you ever get a chance to see this. Many thanks to Luis from Care In the Community Recordings (he funded the production) for the invite to this unusual event.

Luis of Care In the Community adds “The extras who I got in were an interesting bunch. One was Serafina Steer, another the artist performer Jenny Moore (who is a v interesting artist). Also Tom Woolner sculptor/ performer. And artists Simon Clark and Sarah Anderson. Sarah, Jenny and Serafina have just formed a new band. Also apart from producer I was artistic director. I officially produced it for I-D.A Projects (a not for profit organisation).”