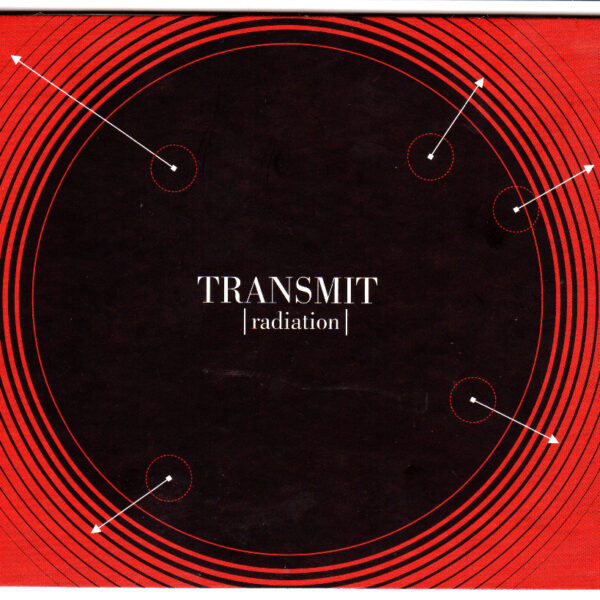 Transmit is a new band project from Tony Buck, the Australian Drummer from The Necks, and [radiation] (MONOTYPE RECORDS MONO082) is their second album after [project]. Effectively they’re pretty much a traditional guitar-bass-drum set-up, but they’ve now been joined by Magda Mayas who contributes some smashing electronic organ licks. Both Buck and Mayas played on 2013’s Plume with John Butcher, showing they’re no slouches on the improvisation front. The album starts out promisingly with two lively cuts of avant-funk malarkey called ‘Vinyl’ and ‘Two Rivers’ that can match DNA or James Chance and The Contortions (or at least makes a game effort), where the atonal guitar riffs dart about like mutant sparrow-hawks, and the work is propelled by energetic, remorseless drum tracks that are I would assume pre-composed or pre-arranged by Buck; the percussion hammer-blows are not only pushed to the fore of the sound but occupying every available space in the piece, such that the other instruments are like brick cladding around its girder structure. Muscular…angular…not an ounce of fat or gristle; on the strength of these two cuts, Transmit may stake their claim to be the dictionary definition of a “tight” band.

These instrumental sections are great, though I’m personally less keen when the vocals arrive, and the album becomes slower and more “moody” after track 2. ‘Drive’ is an unusual attempt at updating the contemporary song form; layers of melodic guitar scribblings, tasteful keyboard licks, and angelic disembodied voices murmuring their obscure phrases. I’ll admit it’s a masterful studio concoction in terms of its balance and arrangement, but it’s just too soft-centred for me. ‘Swimming Alone’ is less “tasteful” than this one, but I’m finding something aimless and unremarkable about the guitar strums just sitting flatly on a bed of tinkling percussion. The lugubrious singing voice just feels forced as it attempts to add some degree of jazzy syncopation to the track. The closing track ‘Who’ is a rambunctious return to rhythmic form and energetic pounding, but the album’s very uneven.