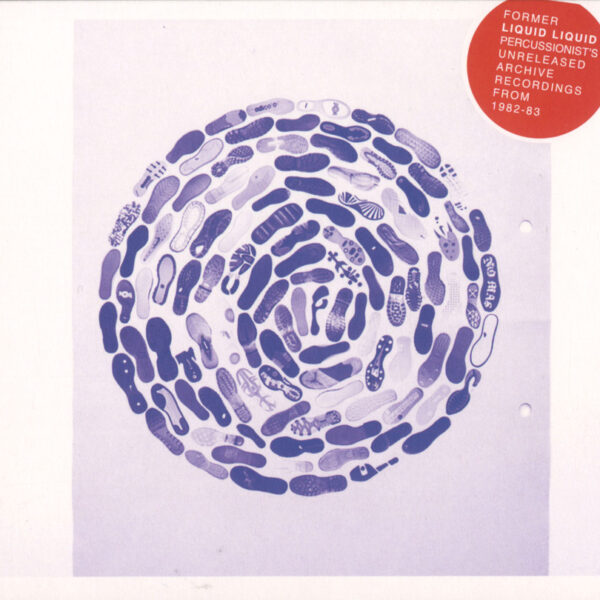 From 15 December 2014 a solo album by Dennis Young, mostly drumming-based, with songs and electronics. Young is currently a composer / musician / songster who enjoys a wide range of tastes and influences on his music, and while I never heard his 2004 solo album Old Dog : New Tricks all the way through, the available tracks on YouTube suggest his capability and fluency with an accomplished mix of styles including Latinesque and jazzy rhythms, very percussion-led naturally, and with a copy of Bitches Brew kept within reach. Reel To Real is from an earlier time however, when Young was still the drummer and marimba player for Liquid Liquid in the 1980s, and when not performing with them he made his own solo recordings at home on a Teac reel-to-reel tape recorder using his drum kit, analogue synths, guitars, and effects. Since he switched to a cassette four-track machine in 1984, he kind of forgot about these early reels until fairly recently. He dusted them down and was pleasantly surprised at how well the material held up. After a bout of editing in 2014, we now have this Staubgold release.

It’s an uneven record, though. We’ve got some very strong tracks at the front of the album: ‘Big Boom’ achieving great results with just a single echoed vocal declaiming randomly over a precise tribal beat; ‘Gravitation’, where the effortless and airy syncopation between the ethereal vocal and drumming is something any band would give their left arm to record; and ‘Panic In The Air’, an epic composition of sequencers, mad synths, and deranged vocalising very much in the Suicide mould and capturing all of the early-1980s New York angst we could wish for, even if it was recorded in New Jersey. If these three tracks alone were on available on a 12-inch single, you’d have a powerful and desirable record.

Thereafter it’s another 13 tracks of home experiments of varying success; at best, some interesting ideas are set in motion but not quite completed, while at worst Young is merely doodling and playing around with his set-up with no apparent end in view. There are songs such as ‘Little Girl’ and ‘Aliens’ where his voice, minus the amplification and effects, is revealed to be rather thin, struggling to express itself against an attenuated, muffled guitar. These recordings weren’t intended for public consumption in the first place, and Young has made a careful selection from a much larger stockpile to create this release. It also shouldn’t reflect on the contribution he made to Liquid Liquid, a band which transformed from a punky group called Liquid Idiot into the more percussion-heavy combo which made a number of fine singles for 99 Records in the early 1980s. Two of their claims to fame: they invented the term “Big Beat”, which became a very trendy thing among 1980s UK record producers; and one of their records was sampled on the single “White Lines”.