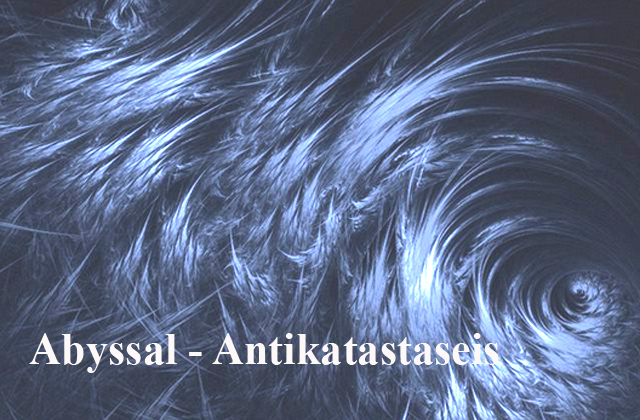 2015 is turning into the year of the revival of death metal and one feature of this renascence is fusions of death metal with other genres like black metal, doom and ambient. Mystery UK band Abyssal manages a mind-boggling fusion of blackened ambient death doom and has been doing so for a while: “Antikatataseis” is its third album. Main member GDC handles the vocals on nearly all tracks and plays most of the instruments, with drumming delegated to Timo Häkkinen. The band’s overall style includes deep and crushing down-tuned riffs, abrupt runaway swirls of tremolo guitar, passages of ambient menace, percussion that erupts in sudden blast-beat spasms and the most impossibly crust-ridden swamp monster vocals this side of the Black Lagoon mixed with harsh and malevolent BM voices. Quite often the band plays with precision and a suffocating guitar sound, and has a preference for stop-start music that leaps and careens from one fast set of beats and rhythms to another; this feature can draw comparisons with French BM legends Deathspell Omega.

Throughout the album, the band pursues a path combining heavier-than-heavy punishing riffs, blast-beat brutality and moments of sudden, almost sunshine clarity and the odd eccentricity such as a tinkling music box on third track “Veil of Transcendence”. The music doesn’t stay still long enough for listeners to catch their breath or settle into a groove, but forces all its anger and aggression to pour out continuously as if purging itself. When each track ends, the duo usually launches straight into another full-on brutal attack on the senses and listeners’ sanity. There isn’t much point trying to figure out the different genres that Abyssal delve into as whatever they do changes and shifts constantly in the blink of an eye.

Some of the best moments are when Abyssal put aside their tools of torture and allow quietly sinister dark ambient passages of tone wash and the occasional background choir to grow and fill in the black voids. The mood is stark and intense, and some listeners might find these ambient sections the most frightening and intimidating. Later tracks feature music as much laden with intense emotion as with blackened death brutality and venture almost into post-metal or dark shoegazer territory. In one of the later songs, “Chrysalis”, the band seems to be going for a melodic pop-friendly post-metal approach with the use of repeated motifs. There may be a jazz influence in the music, in the way the music bounces from one riff to the next and in how songs emphasise long instrumental passages of improvisation.

The outstanding track on the album might well be the last one which features an intense and insane if also bewildering mix of blackened death doom and the most gravelly sets of crushed-rock death metal vocals. There is a strong dramatic, almost cinematic air about this piece as if it’s a test-run for a much longer work serving as a soundtrack to an imminent movie project on the end of life and the consequent disintegration of the universe. Generally  the songs are not that distinct from one another and the music or the energy in it flows more or less continuously so the album, intense and heavy-going as it is, is best heard in one sitting.

The combination of ambient / black / death / doom may be a challenging one for Abyssal to handle all at once but what I have heard so far is good; plenty of raw aggression and fury, moments of sinister brooding and dark atmospheres brimming with malice, all backed by a strong sound that even occasionally goes jangly. The only issue I have is that the vocals are a bit too woolly and muffled for the music, and the aggression and hostility in the singing are so blunted as to be lost. Apart from this, Abyssal doesn’t need to change much except of course to keep polishing and refining its style.