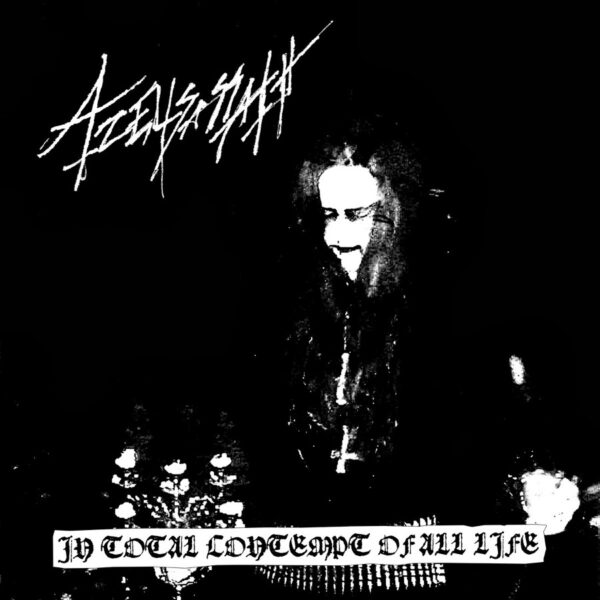 Only a one-man act like Azelisassath would have the guts to issue a debut album called “In Total Contempt of All Life”! With a title like that, you expect this work to come out with all guns blazing shit-hot and firing away and that’s exactly what it does. Don’t worry about where songs end and start as there’s so much anger and passion spilling out of each track that the energy flows over to the next track. Azelisassath’s style is biting-cold grim old skool BM in the style of Norwegian bands of the time, all steely grind guitars, freezing synth wash and rapid-fire beats and crisp business-like drumming. Listening to the music, I don’t care how repetitive it might be or not (if you worry about repetition, the good news is the album is not repetitive at all and has plenty of melody) – there’s so much power and evil streaming out that any flaws or faults the Azelisassath guy overlooked can be forgiven many times over. The atmosphere is blacker than black with sub-zero temperatures and the vocals are spidery and wraith-like.

The actual drumming itself isn’t heavy – a lot of it is more flippy than thumping, though there are plenty of drum rolls – but the music is still thunderous and super-heavy. Yet it all feels effortless on Azelisassath’s part, perhaps because he’s keeping to a minimal set-up of acid-rain tremolo guitars, deep churning bass and trebly-sounding percussion. The production is very clear and special effects are kept for the vocals which are lightly touched with reverb.

The whole thing is so raw, primitive and grim, and as it rampages on the album becomes ever more intense and deranged with the atmosphere growing colder and the blackness becoming more and more ominous, threatening to engulf the music into complete chaos and madness. The vocals especially become more demented and the unearthly screaming tears your eardrums apart. Sheer terror and panic reign from the last third of the album on with a death metal influence in some of the drumming, the dense layers of bass and guitar, and some of the singing. At this point you’re just hanging on, wondering how this is all going to end – the music has got so carried away with itself that it simply must descend into utter blackness, chaos and insane depravity because that’s the path it’s going in.

The only complaint I have is that the tracks are all quite short – they really need to be twice as long as they are for the energy and spirit to play out in full. It’s gloriously berserk with an epic and magnificent sound from start to finish.