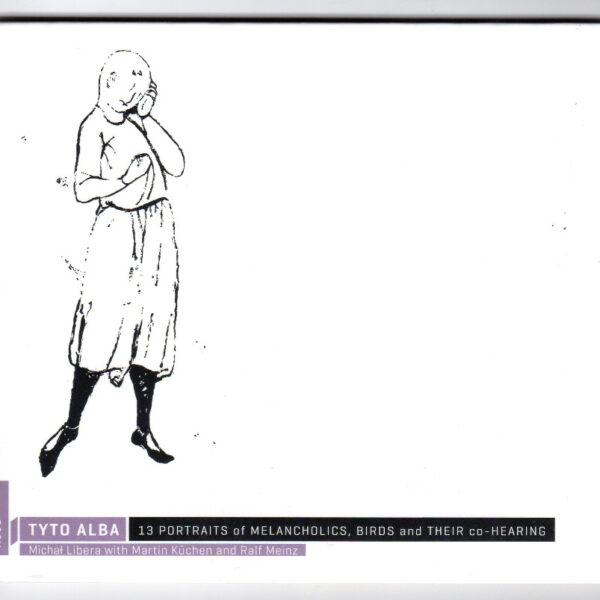 Here’s another conceptual feast from the teeming brain of Michal Libera, the Polish mastermind behind the many-tentacled Bolt Records label…the record 13 Portraits of Melancholics, Birds and Their Co-Hearing (BR R008) is credited (I think) to Tyto Alba, which on this occasion is an ad-hoc team-up of Libera with the saxophone player Martin Küchen, and Ralf Meinz, a technical genius who provided the “sound design”. This means that while Michal reads out his spoken-word fragments strategically extracted from relevant texts, and drops in some obscure field recordings of other strange pre-recorded voices to supplement the plan, Küchen pulls some suitably spectral and edgy abstract tones from the bell of his breathy, minimalist saxophone, and Meinz’s subtle interpolations likewise contribute to the bizarre, unreal atmosphere.

If you can follow the labyrinthine construction here, you’ll find clues scattered about the maze like Hansel and Gretel’s breadcrumbs or Ariadne’s golden thread, which may or may not lead you to the heart of the beast…there is a bird-like theme to be sure…but I think the object of our concentration is the 13 solitary anchorite types from history, a list of whom Michal has kindly printed in the cover, and his survey of loners includes everyone from Alvin Lucier to Max Ernst by way of August Rodin, plus many other significant deep thinkers whose names are unknown to me…and the cultural richness doesn’t end there, if you include the additional field recordings and inserted texts from Walter Marchetti, Rilke, Sebald, Serres, and Chris Watson, just to pull a few names out of the daunting hat which covers Michal Libera’s daunting head. There are even some scary ghost voices quoted from that 3-CD set of Occult Recordings.

The textual and inter-textual density is, as ever with this post-modernist commentator and cultural denizen par excellence, extremely hard to decode…and will probably take several listens before you’re halfway comfortable with it; that is assuming you can get past the very foreboding surface. The speaking voice is gloomy and serious, there are a lot of references to pain, sorrow, and death, and the spare musical / sound-art components are not guaranteed to lift the spirits of any rain-sodden soul. Meanwhile the “ticking clock” effect that runs throughout the whole piece in the background will probably remind you of your own mortality, and that with each 60 seconds you spend listening to this record, you’re another minute nearer the “old skull”. Am I putting you off? Well, don’t despair…this is an interesting curio which only awaits a dedicated crossword-puzzle solver with a willing pair of ears. From 12 March 2015.