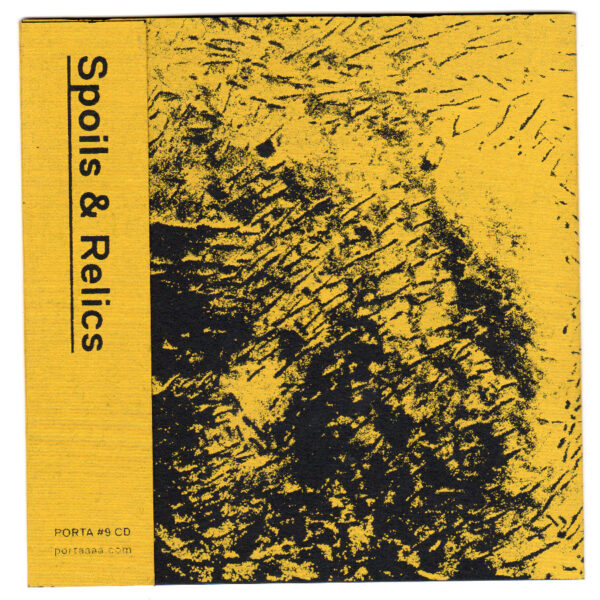 Sent 30 March 2015 by Vasco from Lisbon, one cassette tape not yet heard, and also this limited edition CD (150 copies) from Spoils & Relics. Embed And Then Forget (PORTAAAA PORTA#9 CD) is a single track some 30-minutes long proposing a very perplexing listening experience. I won’t even attempt to describe it for you…at any one time, it’s far from clear what we might be hearing; improvisations, field recordings, found sounds, all of the above. I think it’s been extensively edited, because as soon as it appears possible we might have established a plot point or orientation marker, the recording is cut short or faded out, and the rug is pulled out from under us. Zero stability, in other words. It’s as though they’d set themselves the task of editing a feature film so as to remove all the spoken bits of dialogue, so that all that remains is traces, fleeting images of a character opening their mouth about to speak, no sound. While they haven’t followed that conceptual notion to the point of absurdity, I think that description approximates the overall effect. Despite the strenuous attempts by Spoils & Relics to present a blank, anonymous and almost alienating sound experience, I find it’s still possible to read some sort of sense into the text, treating it like a map to an urban space that doesn’t exist, or something like that. If you allow it, this baffling abstraction could take your mind for a little walk around corners you never knew existed. This much is known – it took three people to compile these pages from the imaginary geography, namely Gary Myles, Kieron Piercy, and Johnny Scarr. How they did it remains a mystery, much like the front cover image which might depict an aerial view of a war-scarred landscape, or part of a sculptural work in progress, or simply a detail from a muddy field. At any rate the gestural marks inscribed on this uncertain field are indicative of…something.