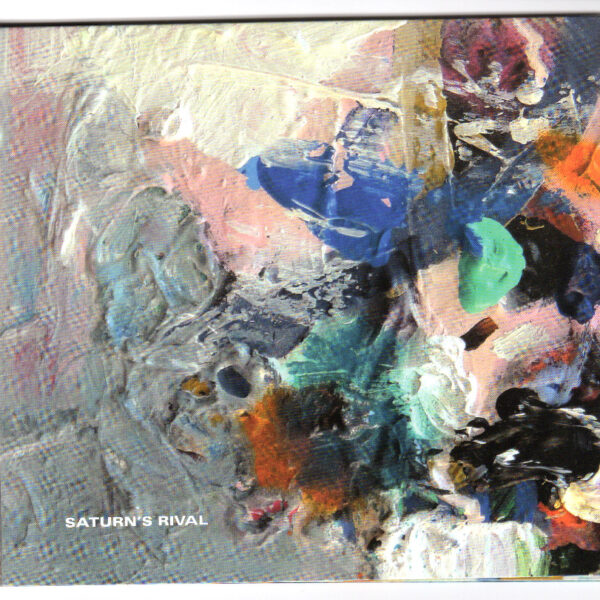 Saturn’s Rival (PFMENTUM PFMCD079) is the eponymous album by a group of five players, most if not all of whom appear to be prominent in the Los Angeles area; at least two of them, the guitarist Maxwell Gualtieri and the pianist Richard Valitutto are also composers as well as improvising jazz musicians, and the saxophonist Ryan Parrish (not the rock drummer) has also played in the large-scale free-for-all combo Atomic Ape, a band who play an unimaginable sprawl of music that embraces everything from soundtrack records to psychedelic rock by way of Gypsy Jazz. Completing the ensemble we have the harpist Susan Allen and the drummer Anjilla Piazza; Allen’s an accomplished performer who has “done” John Cage, among others, on an intriguing record of new harp music for 1750 Arch Records released in 1982.

Together, Saturn’s Rival produce four lengthy workouts of mostly acoustic all-improvised music in these 2011 recordings, released in 2014. I’m already terrified by the prowess and skill of these intelligent polymath musicians, and if I could over-simplify for a second it seems to me they’re mostly coming to improvisation from a background in serious music study and composition, rather than from a purely “jazz” direction – but that’s a particular dichotomy which has been contested and wrestled over since the early days of AMM, and I’m not even sure if it has much currency any more. Besides the complexity of Saturn’s Rival’s music, there is also a certain preciousness in the playing, a precision and attention to detail which occasionally gets in the way of the music’s forward flow. At their best however, they can create a strange and unusual combination of sounds that produces a palpably alien atmosphere which I assume is their collective aim.

But they don’t really “cut loose” enough for me. It’s interesting to compare these West Coast geniuses with the current New York crop of improvising-composer types such as Sam Pluta and Wet Ink Ensemble; the New Yorkers are energetic, concise and incredibly dynamic; Saturn’s Rival have the complexity for sure, but they are largely more relaxed about the performance, conveying the information at a languid rate, and frequently using the occasion to inform us about how proficient they are on each particular instrument. Only Track IV satisfies my lust for unkempt noise during its six glorious minutes, but even here it’s not crazy enough – it’s like a control-freak’s idea of how noise music ought to be, restrained and careful, too much detail and somewhat over-ordered. In like manner, Sean Tully’s limp cover art is a dismal attempt at abstract expressionism with virtually no force or conviction behind the splodges of impasto paint. From 19 March 2015.