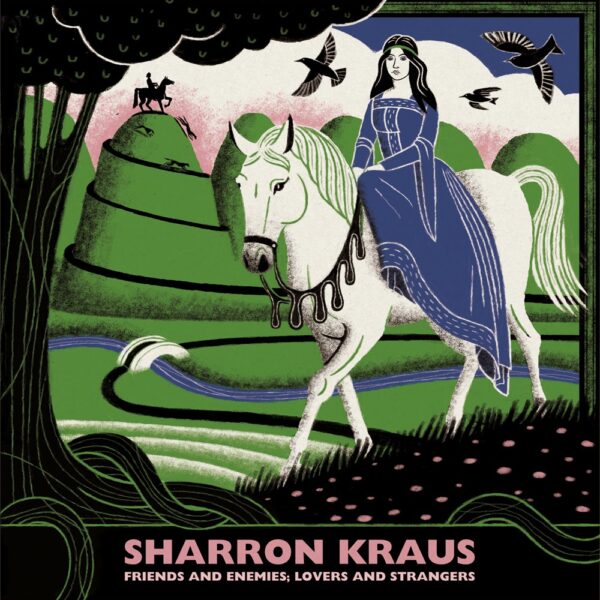 Seems we haven’t heard a song-based album from the great Sharron Kraus for some time now, not since 2010’s The Woody Nightshade; in the interim we did receive the largely instrumental and very wispy acoustic affair, In The Rheidol Valley which she made with Michael Tanner in the open air. So her 2015 album Friends and Enemies, Lovers and Strangers (CLAYPIPE MUSIC pipe 011) is welcome, and even though the vinyl edition is already sold out (released May 2015) there is still a Bandcamp download available. In these nine songs Kraus attempts to come to terms with the Mabinogion, the collection of early Welsh material (assembled in the middle ages, but probably derived from an oral tradition that pre-dates that) which for a long time was regarded by scholars as a form of folklore or stemming from pagan mythology, but is now (according to Wikipedia) treated as a form of prose literature, on account of the sophisticated characterisation and layered story-telling devices. I’m at a loss, never having read these important texts (the last time this came up was when we spoke to Dafydd Roberts of Our Glassie Azoth in the 1990s), but then it seems Sharron herself is also coming to terms with the enormity of the task she’s taken on. She freely admits that she was enchanted by the Mabinogion when she started reading, but also felt confused and even mystified by what was going on in the texts, or what it was she was responding to. She dealt with the situation in the only way an artist should, by making that confusion into art. Friends and Enemies, Lovers and Strangers is not intended as an “authoritative” interpretation of the text, rather as one person’s intimate and personal response. I’m all for it.

The gorgeous songs on the record of course betray no sign of confusion at all, rather the simple clarity and straightforward delivery that Sharron Kraus’s singing voice – and honest personality – was born to deliver. Throughout each piece her voice remains steady and assured as she illuminates and illustrates her lyrics, themselves as tricky and layered as I assume the original text to be; strange characters, strange motives, and even permitting herself an occasional meta-commentary on the whole process; “we are born into a story,” she sings on ‘A Hero’s Death’, suggesting something about the inevitability of fate. Or something about the culture of story-telling, how reality slowly becomes fossilised into narrative form. Maybe she’s trying to reverse that fossilisation process, make the statues leap up and dance. The Mabinogion is not unlike the Arthurian legends, with kings, queens, battles, powerful themes of love and death; there’s plenty of scope for excitement, but Sharron’s songs are drained of any display of untoward emotion, and in true tradition of oral story-teller or ballad singer, she simply reports the information as directly and clearly as possible. The musical backdrop is also a model of clarity, all acoustic guitars, dulcimer, percussion and recorders, played mostly by Sharron with the help of Harriet Earls on harp and regular mainstay Nick Palmer on piano, plus Nancy Wallace with harmony vocals. Frances Castle, who runs the Clay Pipe Music label, did the beautiful cover illustration; her award-winning work harks back to the golden days of Albion when Eric Ravilious reigned supreme. Received 2nd March 2015.