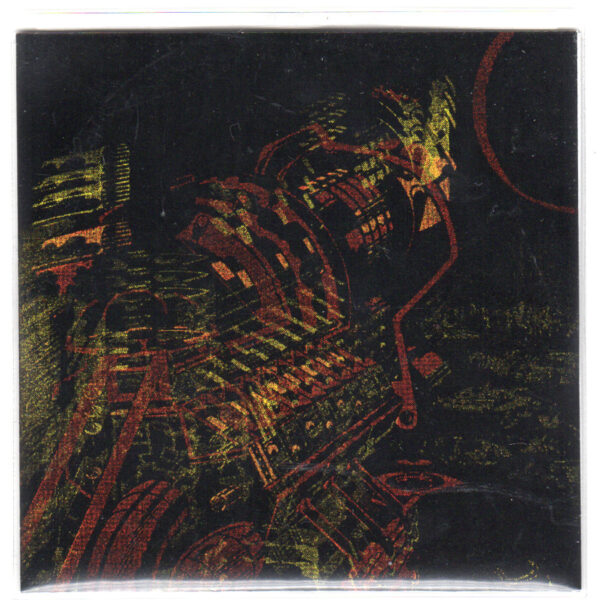 Another wild experiment from marginal genius Seth Cooke, the man who’s a practising psycho-therapist besides being a percussionist, sound-artist, and meddler with digital things…just in the last few years we’ve heard some astonishing published statements from him in the form of albums like Pneuma or Sightseer, besides his contribution to the computer-death virus tape Computer Music on the LF Records label. With his mini-CDR Eternal World Engines Of The Demiurge (LF RECORDS LF044), he’s returning to ground previously staked out on Four No-Input Field Recordings, a release on his own Every Contact Leaves A Trace label, where it’s likely he “normalised” digital sound files by subjecting them to a spot of conversion-tool malarkey that plays hob with the digital innards of an audio file.

On the present release, we have two further examples of subverting and bypassing the norms of computer technology, using the Infinite Jukebox software devised by Paul Lamere 1. On the first track he applies it to a 3D printer, and the hardware is sent into a tizzy as it tries to complete impossible commands or follow an illogical script. The resulting noise is far from musical…in fact it’s well-nigh insufferable, but the process is an interesting one to pursue. Even rougher on the old eardrums is ‘AARIEL’, where the fiendish Infinite Jukebox logic is applied to a corrupted .mp3 file, causing it to “sing gibberish forever”. Again, I assume the process that’s relevant is forcing a juncture between a hacked playback device and a badly-formed computer file, just to see if anything will happen.

In the short paragraph describing the work, Cooke stresses the “endless” aspect, implying that unless the whole set-up were unplugged the Infinite Jukebox would, true to its name, keep running these barmy scripts forever. Cooke and Lamere are not the first or only to explore this avenue of digital subversion; one of the more frequent tropes that keeps turning up is musicians attempting to “play” image information from a TIFF as if it were a music file, and since both image and audio data can be encoded in a RAW wrapper, they’ve already got a head start. However, Eternal World Engines Of The Demiurge is one of the more extreme examples in this “genre” that I’ve encountered. From 12 March 2015.