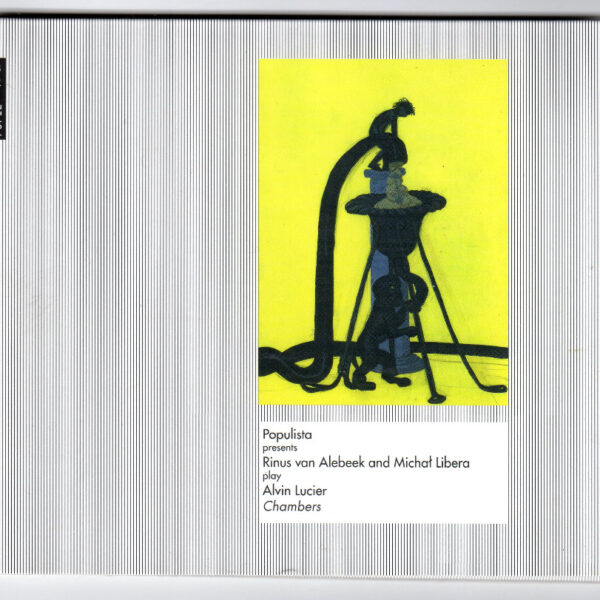 Here we have Bô?t Records BR 1012, the third in a package from March 2015 where we were treated to the latest episodes from the conceptual Populista series compiled by Micha? Libera. In this instance it’s the turn of Alvin Lucier to have his compositional ideas expanded and built upon by Libera’s no-holds-barred approach to modernism. He’s aided by Rinus van Alebeek, the well-travelled and radical tape composer whose own Staaltape releases often find favour in these pages, and the Lucier work under consideration is Chambers from 1968.

Chambers is one of those compositions which exists purely as prose instructions, an approach quite familiar in 20th century art, and not just in music – I’m pretty sure the Fluxus people used the method to engineer performance events, some of them quite pointless in nature, and you’re probably familiar with those “instructional” pieces written by Yoko Ono that advise you to go outside and jump in the lake, or something. Two scant paragraphs are printed inside the present release, and that may be the totality of Chambers. The idea is that you collect a number of small objects and find a way to get sound out of them. A list of such objects is provided, likewise multiple suggestions for how to produce a noise from them. Right there you’ve got the careers of Jeph Jerman or Lee Patterson pretty much mapped out, but that’s incidental. The crux of Lucier’s idea was to persuade musicians (and listeners of course) that even the smallest physical object might have the capacity to contain an entire unique sonic environment.

Libera and Van Alebeek have simply scaled up this idea. They use the instructions as an opportunity for a road trip, exploring entire environments – in this case, European cities – and testing them for their potential for sound-making. The entire album is a document of this process in action; they’re effectively trying to “play” the city spaces. Of course since Libera is involved it’s not enough to settle for presenting a set of urban field recordings – fascinating and rich though Van Alebeek’s phonographic collections may be. Each piece contains additional text readings, performed by Libera and Barbara Eramo, often distressed or distorted in aural quality, most if not all of them taken from Invisible Cities, a work by our favourite playful Italian conceptual author, Italo Calvino 1.

This simple expedient has the strong effect of (a) enriching the field recordings with textual layers of meaning, (b) deepening the already radical re-interpretation of Alvin Lucier that has been proposed, and (c) to some extent even enlarging the meaning of Calvino’s work, aligning it with avant-garde music in a quite unexpected manner. It also manages to (d) provide a self-aware commentary on the entire composition, calling attention to the artifice in a highly post-modern way 2. This may seem intrusive and unnecessary, but it will not detract from your enjoyment.

Speaking of which I might add that even without this conceptual framework (which is highly interesting), the record also sounds amazing…Van Alebeek in particular has a knack for revealing the hidden aspects and traces of modern life with his questing microphones and glitchy cassette tapes, resulting in magical-realist documents that seem dreamlike in their vividness and impossible beauty, and these qualities abound on this release. In this he is matched only by such luminaries as Aki Onda or Zan Hoffman.