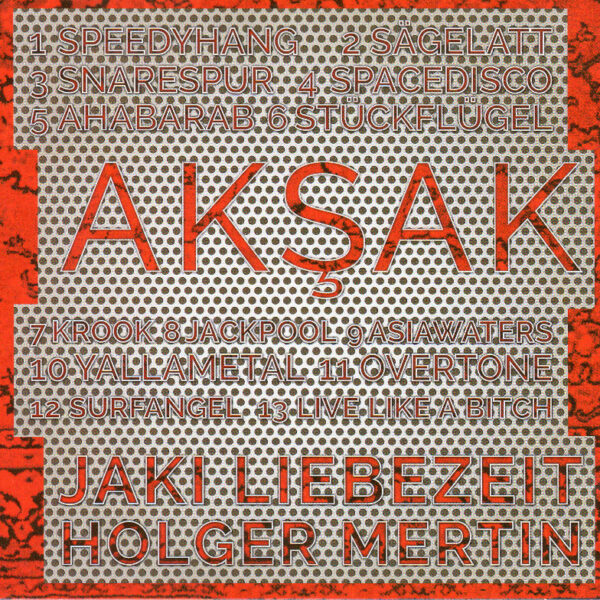 An approachable, percussion fusion set from an inter-generational duo comprising Can’s rhythm wizard Jaki Liebezeit and multi-percussionist Holger Mertin, with strings imported from locations local and exotic. On video and record, Mertin moves with the greater exuberance, lunging at his battery like a child at play until – under the senior’s settling influence – he finds his groove. Liebezeit’s reduced drum kit and heavy-footed loops convey a heightened (sometimes brow-furrowing) level of restraint, though they do provide solid flooring for Mertin’s antics. Together the pair march through incense-fragranced corridors with a lockstep gait that loosens over time to reveal new layers of melody and complexity. Strewn into this polyrhythmic brew we catch whiffs of prog-rock (courtesy of producer Joseph Suchy’s splendid, smoky trails of guitar reverb on ‘Sägelatt’ and ‘Spacedisco’) and shone-up, Sun City Girls-style ethnographic extemporisation, albeit a few notches lower on the ingratiating lunacy scale. There is a particularly evocative voyage east in ‘Asiawaters’, its resonating gongs conjuring up Japanese temples through a haze of wind chimes. Other exclusively percussion pieces like ‘Ahabarab’ and ‘Yallamental’ recall Muslimgauze’s war-scarred bits n’bobs loop experiments under the synthetic sheen of one of Burnt Friedman’s exotic, imaginary ensembles. While there’s not a wild diversity from one track to another (as can be the case with percussion-led recordings), a little time might be needed to settle into this one, but it’s worth it. 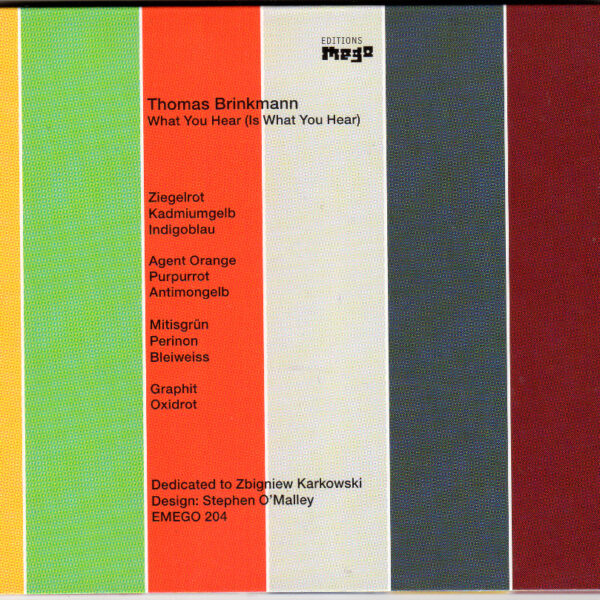 What we hear here is erstwhile techno-minimalist Thomas Brinkmann dabbling matter-of-factly with sounds electroacoustic, industrially manufactured; slipping in a couple of sober time-out sessions (‘Indigo’ / ‘White Lead’) to detour us briefly from more merciless industrialist totems such as ‘Ziegelrot’ and ‘Agent Orange’ via gentler imaginings of sea and mist. Over the years, Brinkmann’s minimalism has divested itself of the once regular techno- prefix, effecting a procedural metamorphosis into such concentrated studies of seemingly simple sounds as this: technology without the techno; the emancipation of the machine from the man. Precedents can be found in recent, longer form pieces, such as The Mortimer Trap – his 2012 collaboration with Oren Ambarchi – in which an evolving mechanical intelligence hums with increasing warmth, discovering its inner dimensions with leisurely curiosity and a harmony made possible by Ambarchi’s faint, signature pulses that evoke the onset of new life. In What You Hear there are also discernable traces of another collaboration – Ambarchi’s Quixoticism – in which Brinkmann’s catchy, tugboat chug entices the ear into the gossamer weft of Eyvind Kang’s strings and John Tilbury’s Feldman-fed piano. What You Hear… offers similar themes, but tips the balance away from the organic; snippeting Brinkmann’s spectrum of abrasiveness into eleven distinct and surprisingly easy hits of mechanical churn, sandstorm and ambient haze, each titled after one of the colours striped across the sleeve. It’s a deservedly rough-edged affair (there being much to say in a short time frame), but it’s the kind of noise that obliging friends and partners should quickly warm to. 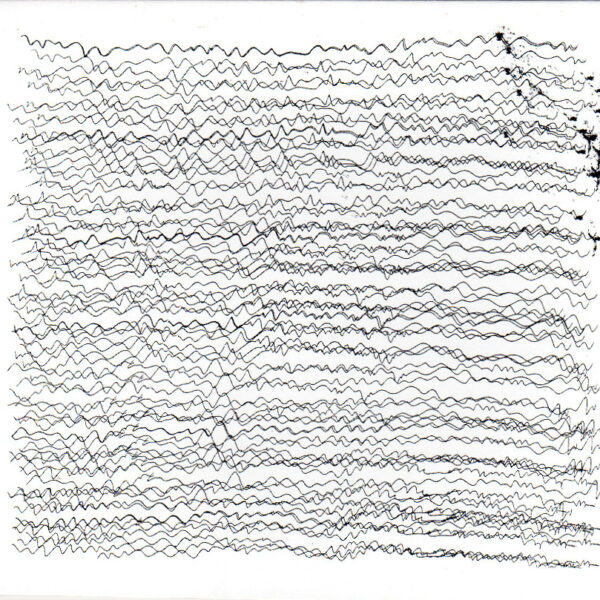 Erecting dimorphous structures in a manner not unlike his near-compatriot Yannis Kyriakides, Greek electro-acoustician Spyros Polychronopoulos (aka Spyweirdos) honours his tradition in his electr(on)ic compositions with alarming cuts and transitions as well as more gradual sonic insertions, sometimes separating the attention onto two planes: to the chuffing powerhouse and to the electric storms that assail it. Sweeping skilfully between markedly different spaces throughout the course of the album, he wastes little track time on redundant repetition or unnecessary detail, maintaining instead a moderate pace along a path that never quite provides (or attempts) that ‘how did I get here?’ effect so prevalent in this well-polished genre. A perpetual, inbuilt instability and wilfully choppy sequencing manage to keep the listener updated along a sometimes wobbly flight path.

Where specific themes and sound sources often come into play in electro-acoustic music, this plainly titled record ditches the fireworks for deeper thought into Spyros’ ongoing exploration of reverb effects, the management of sounds of unspecified origin and ‘unique timbre’, and the point at which echo and anechoic are said to be indistinguishable from one another (though how does one judge?). The accompanying notes suggest an ideal listening situation in which the contents could be experienced as though performed in real time and space. “Music’s aura” – he explains – “is destructed (sic) by listening to pre-recorded music. Yet, due to the peculiar perception of electronic sounds, the… aura of the tracks on this album alternates from presence to absence”. Of course, one can more easily recognise this dichotomy as a garden-variety series of dynamic shifts – which doesn’t exactly flag this work up as unusual – but on a pure listening level at least it provides as much disorientation as interest.

Incidentally, for those interested in an introduction to Polychronopoulos’ work, a collaboration with Antonis Anissegos entitled Piano Acts can be downloaded for free from the ROOM40 label website.