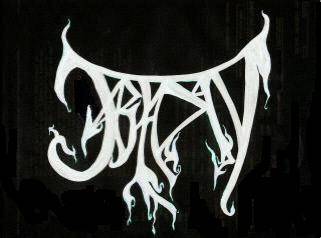 This one-man ambient black metal act was very quiet for a few years after the 2011 release of “Trostlosigkeit” but in 2014 he stormed back to attention with an EP, “Gail”, and two albums, “Maj” and “Fin”. At 29 minutes, “Fin” is much the shorter of the two full-lengths, and it’s an ideal introduction to the range of music that Jabladav works in: starting from buzzing noisy BM with a Burzumesque pop feel, “Fin” delves into trance and abstract drone tone soundscapes. Everything happens in an environment that seems blacker than black, pained and utterly bleak, yet there are moments of serenity and utter bliss.

The first few tracks are straight-out black metal songs that almost verge on pop, yet have a keen, sharp, crackly sound and a background echo that keep this listener on edge. Rasping reptilian vokills add to the sense of unease on “De sista viskningar till min alskade” and the song quickly pulls into a short acoustic coda that leaves me feeling uneasy at what may come next. The second track starts off as an acoustic post-rock effort with clean-toned though haunting and spooky singing but its dark underside of crispy crackling noise guitar, demonic howl and noodling bass soon claim dominance. The sounds can be jangly, unearthly and beautiful but there is always an air of unease, even bleakness. “Dod Spell” is a jagged stuttering instrumental where the bass takes the lead over guitar noise clouds.

We continue through acoustic guitar meditation, expansive space ambient / guitar jangle drift psychedelia (that turns into a crazed technical guitar-sizzle spasm) and a fusion BM noise-lite / jazzy post-rock piece shot through with trebly guitar howl. The last two tracks, the clearly related “Before the Frost” and “After the Frost”, with no hint of anything in-between, are Jabladav at his most experimental and abstract: the former track features layers of space ambient tones and drones travelling together in a cool neutral space, and the second piece seems to be drawn-out low piano rumble that grows mossy and vague and which almost disappears into the deep black space.

Several tracks are very short but the instrumental pieces are minimal and easy to follow, and they manage to say all they need to and no more, and there they end. The more pop-oriented BM-dominant tracks are notable for their austere style and have a strong sense of utter isolation and aloneness. You might expect with such short and musically varied pieces that the album might be something of a travelogue through different sonic landscapes: a bit rushed and not delving very deeply into each. It turns out though that each song or instrumental piece has such a strong individual identity, that it makes a very deep impression on you and you can find yourself playing this album quite obsessively. This is a stunning collection of sketches of utter bleakness and dark beauty.

All of Jabladav’s 2014 releases are available in limited print runs of 50 copies each; contact Aquarius Records to see if they still have any.