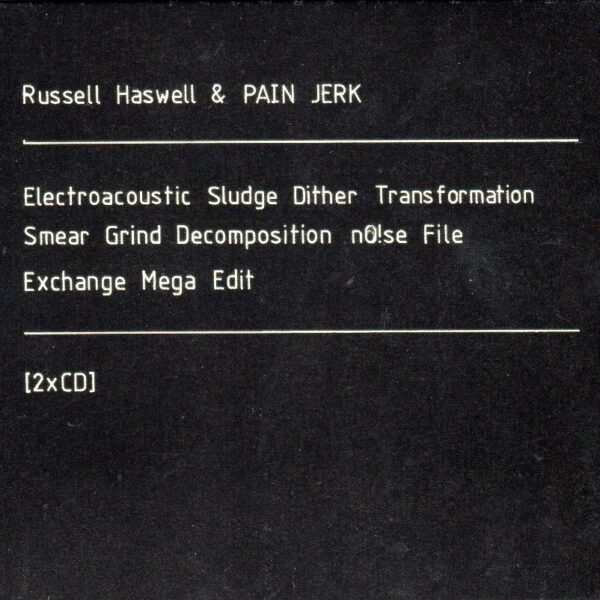 This “extreme duet mass atack” (unquote) finds Russell Haswell, electroacoustician, label boss of the OR label and remixer of Merzbow, Thurston Moore a.o. teaming up with harsh noise fiend Pain Jerk a.k.a. Kohei Gomi; Amp imprint majordomo with releases on Harbinger and RRR. They initially met up at Nottingham’s sinister sounding ‘Rammel Club’ in 2012, after corresponding for ages, and the subsequent file recordings of the gig and various other solo recordings were exchanged between the two, undergoing a fairly savage mauling over a solid two-year period.

With ‘Audiofile engineering’, ‘Fairfield circuitry’, ‘Hinton instruments’, ‘M.A.S.F.’ and ‘M.O.T.O.’ on hand “Russell Haswell’s Mega Edit” occupies the first disc, coming in at a gigantic one hour, twelve minutes and fifty-nine seconds. (!!) . To be honest, as someone of a certain vintage and proud of his non-musician status, Haswell’s array of gear leaves me mightily befuddled, so if it’s o.k. with you, dear reader, I’d like to set up an alternate reality in which we locate a white lab-coated Mister H. skulking within the confines of a strange, top secret government installation, buried deep in the leafy English countryside with a roof bristling with a tangled mass of aerials and antennae. His eldritch transmissions girdling the globe, while Joe and Josephine Public remain completely oblivious to their malevolent contents. Makes more sense to me!

Though his fifty per cent of the package is too heavily mired in the antimusic camp to be rubber stamped a ‘suite’, there is a series of differing moods displayed, though all (as expected) are cut from dark and resilient fibres. We begin with a welter of industrially-derived metallic texture/klang that come on all early SPK, which then leads on to heavily doctored feedback passages and then proceed to underwater short wave, field recordings from the cyborg wars and a series of irritable bowel synthdrones.

Perversely, ‘Pain Jerk’s Mega Edit’ clocks in at thirty-five minutes and thirteen seconds, half the duration of disc one, his manipulation of hand-made devices and trogotronics (nope, me neither…) working as a more concentrated assault on the senses. It’s a rapid-fire strategy where cartoonish juxtapositions vie with a gloopy rhtthmic churn worthy of a vat of sentient treacle. We then eventually welcome strands of early radiophonics, ray gun blasts, the rush of closely-miked sluice gates and an assorted procession of digital cough’n’splatter. And… intent on retaining some vestiges of humanity (at last! I was feeling like Robinson Crusoe before Friday…), we close with what I guess is the scattered applause of the Rammel Club clientele.

N.B. As a safety precaution after playing, please be sure to secure these discs within the lead-lined container provided. Thank you.

Editor’s Note: as the world knows, “Trogotronics” is a brand name for a series of hand-made electronic devices, FX pedals and synths created by an American company. Naturally enough, their logo features the surly visage of a caveman, the better to emphasise the primitive nature of the noise created by their products.