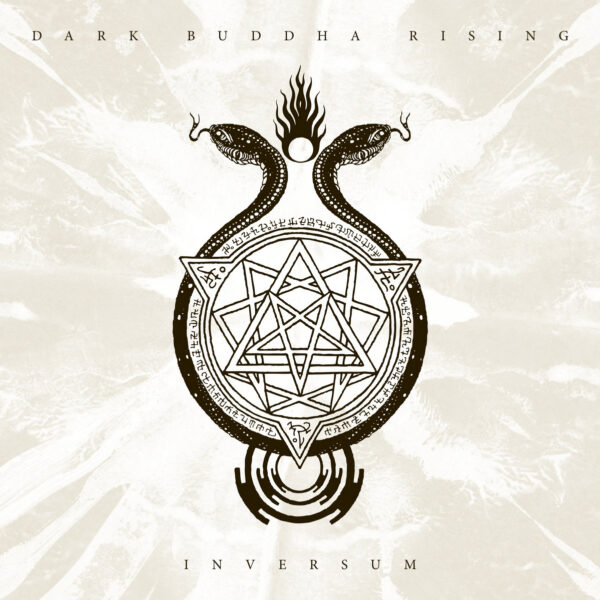 As surely as the sun rises in the east and the fishes swim in the sea, so a Dark Buddha Rising album will feature extended trips into dark and expansive doom metal trance space. This latest heavy psychedelic venture contains two tracks, “Eso” and “Exo”, each clocking in over 20 minutes of sprawling hypnotic music. The tracks usually develop quite slowly, with atmosphere prominent in its evolution upfront while the music gradually assumes more definite forms through repetition of riffs and the drumming takes on a ritualistic role to encourage full immersion and profound changes in consciousness. Chanting voices coalesce into definite forms in the background.

The first few times you listen to the two tracks, you may not find much to distinguish between them – they’re both minimal in their presentation, the instruments being limited to guitars, background ambient effects and drums, and the structures of both tracks rely on repetitions of series of riff and rhythm loops. It’s with repeating hearings that you realise the two tracks contrast and complement each other in music and mood. “Eso” has a definite mood, one of dread and even of pain and bleakness at some points during its journey, and the track feels claustrophobic and suffocating. The music is very brooding and inward-looking. It is very monotonous and it only picks up speed, energy and force quite late in the piece. Then it takes on a relentless machine-like aspect as it climbs higher and higher towards its kismet, with demon voices shrieking in the background and guitar riffs grinding endlessly.

Passing from one level of existence and reality to the next, the music of “Exo” starts cautiously and hesitantly, like a newly born creature finding its legs in a new unforgiving world of harsh and stinging light. The murmuring riffs give the track its uneasy brooding quality but there is a new feeling of urgency in parts as well. This track tends to stress drone – and lots of it, all very over-stretched – and listeners may think of droney doom bands like Sunn0))) and Spain’s Orthodox during their early periods. There are fewer vocals and what you do hear of them isn’t always easy to detect. The sense of dark and malevolent ritual is strong in this track and parts of it are downright spooky. Guitars are deep and rumbly in their sound, almost to the extent where you can imagine them standing sentinel over the track to shepherd listeners into an entranced state that demands their total absorption. The track becomes interesting halfway through when it slows right down and becomes very fragmented with only drone stretched thin holding the music together. Suddenly it explodes into a mighty monster, with looping, surging riffs, anguished voices crying and howling at the point of point, and a feeling of rapidly growing tension that can only resolve itself in an abrupt climax. Beyond this, where enlightenment might be expected to exist, there is the realisation that the soul’s journey has but completed one circle and there are more circles to be traced …

Both tracks can be understood as mirror reflections of one another, and each links to the other in a never-ending cycle of repetition that might lack purpose or meaning. Of the two tracks, I think most listeners will find “Exo” to be more interesting and varied but the variety is in the latter half of the track rather than spread out evenly across the entire piece. To get value out of DBR recordings, listeners need to be very patient!

The music is good but my feeling is that it’s a bit too controlled or restrained, and needs to be more deranged than it is. For this kind of dark droning sludge doom whose message might be that life might be meaningless and that seeking enlightenment or meaning may spell danger, the music needs some hysteria, some feeling that life is close to chaos, to succeed.