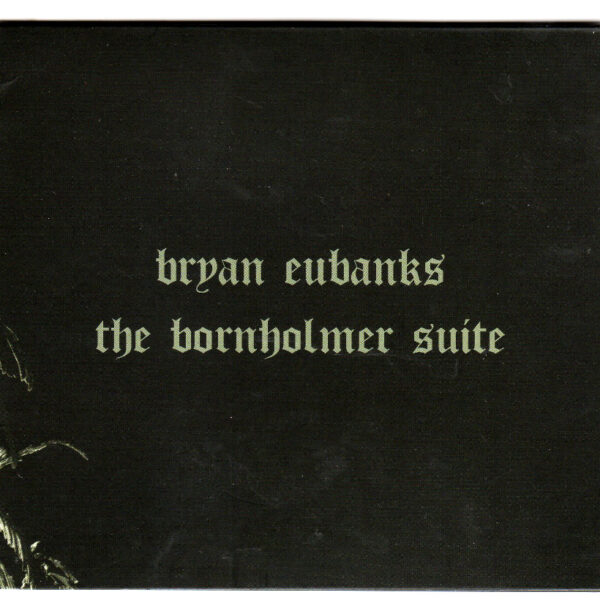 Eubanks’ The Bornholmer Suite is an album of “open circuit feedback recorded in berlin in the winter of 2013” according to the only sleevenote on the minimalist digipak sleeve. The sleeve itself features some very beautiful yet somehow almost unsettling images by Francisca Pageo of a pony grazing and some tropical plants at night. The results of Eubanks’ concentrated efforts generating and manipulating feedback are very unlike the noises made by other known exponents of this technique, of which two high profile examples I could mention, for the sake of context, are Henrik Rylander and Toshimaru Nakamura. Somehow Eubanks’ work is more organic or natural-sounding than either Rylander’s abrasive brittle shards or Nakamura’s often barely-there wafts of sound.

There are just over fifty minutes of pristinely recorded sound on this disc, taking the form of fifty minute-long tracks. Eubanks coaxes a huge range of sounds from his equipment; some percussive, some rhythmic, others less so; some speaker-threatening, others more refined, but on the whole, sounds you would probably instantly recognise as mixing console feedback. Contrary to what you may expect, there is a warm, welcoming nature to this music and personally, I’ve found its company to be extremely tranquil, rather than tranquillising. That is not to say it is in any way torpid – there’s a challenging, albeit brief, section halfway that kick-started my nervous system for its minute duration.

His decision to truncate his source material into 60 second chunks is a fine one – it gives the material a chance to develop and change quickly and certainly keep the attention of the listener over its whole duration. One wonders how long it took Eubanks to collect his source material and whether he might have engaged in a rigorous, regular “feedback session” every day for two months. Although I wouldn’t be surprised if the truth was that he did this every day for two years. Eubanks has worked with like-minded artists such as Mattin, Jason Kahn, and Ryu Hankil in the past, and this recording certainly displays a rigour of the stripe you would expect from those individuals.

The Bornholmer Suite is only the fourth release on Hector Rey’s Nueni Recs label. The eagle-eyed amongst you will have noticed that its catalogue number is #003, but Nueni started with #000. The three previous offerings on Nueni are a cd-r involving Ilia Belorukov, Harpakahylo, Patryk Lichota and Kim Nasung; and two cds, one by Lali Barrière and Miguel A. García, and the other by Angle, aka Jean-Luc Guionnet and Jean-Phillipe Gross. At the time of writing, I notice that there are an additional two new titles from Agnes Pe & Niebla Fascista and Oier Iruretagoiena, all of whom are new names to me. So, an intriguing start to this imprint. I hope they go from strength to strength.