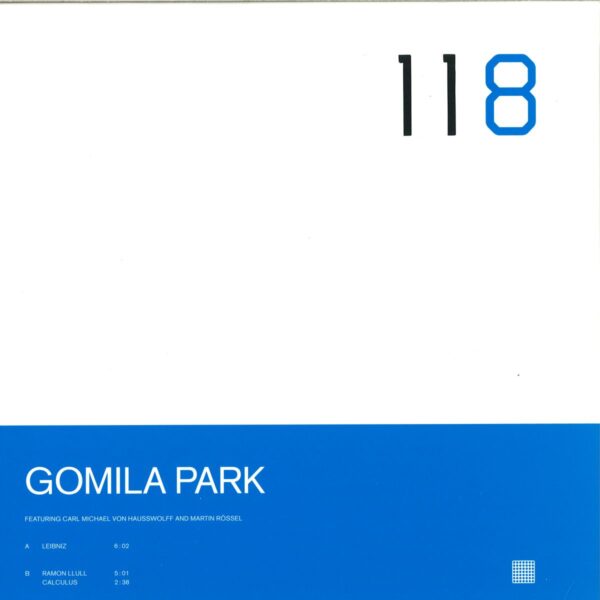 Gomila Park turns out to be a duo of Swedes, Martin Rössel working with Carl Michael von Hausswolff, of all people. It feels like we haven’t heard from good old CMVH in many a moon; he’s a long-serving genius of subtle but fatal noise-emissions, a man whose every move is calibrated to produce maxium devastation in the populace while still staying below radar. He’s one of our most trusted agents. I know precisely zero about Martin Rössel, except he deserves our respect as the member of an early 1980s Swedish electronic band called Dom Dummaste, which he did with Lars Cleveman. He might make his bed on the slightly poppier side of things than CMVH if an album like 1984’s För Mycket Tid is reliable evidence.

Gomila Park’s Ununoctium EP (RASTER-NOTON R-N 118) is just three tracks, presenting a form of conceptual techno that’s both intriguing and almost danceable. Certainly the A-side ‘Leibniz’ is bound to please dancefloor gauchos who enjoy a slab of heavy-metal distorted guitar added to their daily beats, and it emerges as a grandiloquent statement in support of the record’s theme – which is an oblique tribute to the early scientists whose work developed the binary system, and (by implication) ultimately led to digital technology. If Carl Michael’s work has any value, and I would say it does, it’s because he’s always exploring the fundamental roots of any idea or object, hoping to question our assumptions in a critical fashion, and remind us of the hard facts about everything from an airport to a skyscraper.

Said theme continues on the B-side, with low-key drum-machine anthems dedicated to the Renaissance philosopher Ramon Lull, and another track called simply ‘Calculus’. These two tunes appeal to me more than the bombastic A-side and are high-grade examples of imaginative “dark wave” electro bounce, but taken as a whole these three cuts descry a trajectory that is none too sanguine; we start out confident, and end up uncertain and cold. Whatever particular narrative Gomila Park have in mind with moving us from Leibniz to Calculus in this way, it’s clear they aren’t very optimistic about its outcome. Arrived 14th April 2015.