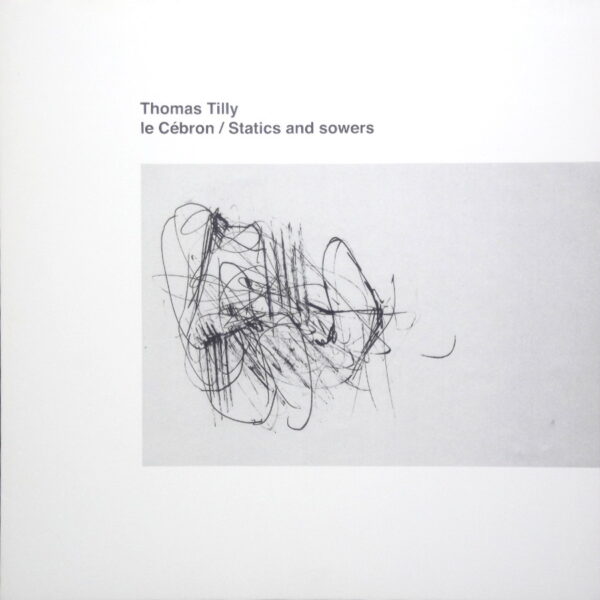 Le Cébron / Statics and Sowers is a clear vinyl LP (AUSENRAUM AR-LP-002) by Thomas Tilly, which as usual with this creator hovers gently midway between field recordings, electronica, and scientific investigation – not unlike his previous dense thicket of micro-sounds, Script Geometry. On one side his recordings and treatments start with broken ice from Lake Cébron in France; on the other, he’s doing it with beehives and electronic circuits. The ice-man side feels completely non-eventful on early spins, but I appreciate the “frozen minimalism” approach which lurks behind its conception and its execution. It’s something about freezing movement, the paralysis of everything…you’d imagine that Tilly could stop time itself moving if he had to. It’d probably be relatively easy for him too; most mad scientists would think of huge generators and menacing machines the size of a public library. Conversely, Tilly could do it with two miniaturised boxes and a coil of copper wire.

‘Statics and Sowers’ is certainly more on the maximal side, even if it’s unlikely to be appearing at a rave gig near your town any day. For this bee-centric affair, Tilly applies switches in a manner to make his edits and interventions that shade more obtrusive, so that we click back and forth between the world of the beehive (all warm and buzzy – a nice place to be, all told) and the digital realm of pure electronic noise. It’s a shocking feeling, causing a deeper rift than a simple shift in timbres normally creates. It’s more like your whole body is switching dimensions. In doing this, Tilly also seems to be making a tangible connection between the circuits of his mixing desk and the bees themselves. They’re about the same size, for starters. Perhaps he’s also able to get customised components, for instance resistors made up with stripy jackets, so that the deception is more or less undetectable. He dedicates this work to Zbigniew Karkowski, who ascended to the great beehive in the sky some time ago. From 27 May 2014, limited edition LP of 300 copies.