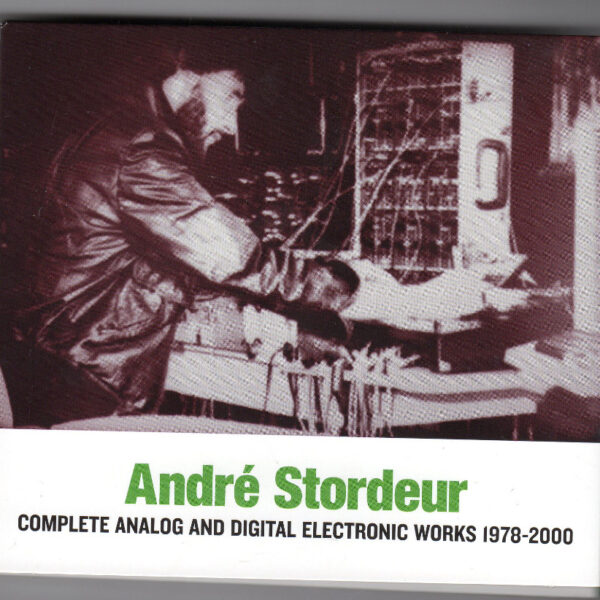 I knew nothing about Belgium’s contribution to the continuum of 20th century electronic music until we received this triple-CD set by André Stordeur. The Complete Analog and Digital Electronic Works 1978-2000 (SUB ROSA SR395) not only brings us the music of this important pioneer but also a short history written from his standpoint contained in the printed booklet. His 18 Days album, recorded in 1978 and 1979, occupies all of CD 1, and it’s one of the main points of interest here. The original LP, published on the Igloo label (which used to be home to some exciting avant-garde records), is hard to find; this remastered reissue is most welcome. It was composed and performed on a mixture of analogue and digital equipment, including the famed EMS AKS which he’d owned since 1973, and an Oberheim; most tellingly, he wrote his own “special” software for the computerised parts. He continues to write and publish his own scripts and programs to this day.

18 Days reflects the about-face Stordeur underwent in his musical life; he’d been a successful jazz drummer in an award-winning Belgian quartet in the 1960s, and it looked like his career path was assured. Then in the early 1970s he heard copies of two albums by Morton Subotnick on the Nonesuch label, including the famed and surprisingly popular Silver Apples of the Moon. It’s not totally clear why, but the innovative sound grabbed him instantly; the next step was the technical learning side of things, which he learned from American magazines like Synapse, and through teaching himself. He founded the Synthese electronic music studio in Brussels in 1973, and purchased his first EMS. Before very long he found himself at the centre of something exciting… “I had half of the Brussels cultural scene in my apartment,” he tells us. There follow long lists of names of important international composers who he met or influenced him or who were invited to his music festivals.

Stordeur seems reluctant, in the printed book at least, to elaborate on his methods, creative process, or his artistic ambitions; he seems happier talking about equipment, for instance providing detailed descriptions of his frustrations regarding the incompatible sizes of jackplugs when he was purchasing polyphonic modules from Oberheim in 1979. But for 18 Days he does reveal that it was a conscious reaction against “so-called cosmic music” which, to his mind, had dominated electronic music production in a bad, commercialised way by the late 1970s 1. Instead, he wanted to create music that is “human and intimate”, and accordingly the six pieces here – with the exception of ‘To You’, which is a rather melancholy piece of baroque chamber music played electronically – are extremely abstract, yet suffused with recognisable emotions to which the listener can successfully map their own feelings.

Stordeur wanted to say something about our every-day “fears and obsessions”, which may account for the slightly dark caste of the music. It’s impressively single-minded, each piece ploughing a furrow of thoughts and feelings until the thing is worked out, the demon is exorcised. Stordeur’s music has a human, recognisable scale; if we compare this with some of the high-minded records published by INA-GRM at this time, it’s instructive. The French composers (Parmegiani, Bayle, Chion, Schwarz, Lejeune et al), were preoccupied with grand schemes to do with science, mathematics, mythology, history, philosophy, and the creation of the world; great music from all, but you could also say it tended to dwarfed us puny humans with its lofty ideals and portentousness. With Stordeur, you’ll find there’s room for you in the picture too.

On Disc 2 we’ve got two of Stordeur’s 1980s works, ‘Oh Well’ and ‘Chant 1OA’. By this time he was well on the way to becoming an influential teacher of electronic composition in Flanders and Belgium, and had found time to study at IRCAM in 1981 and in Chicago. ‘Oh Well’ is already a far cry from the relatively soothing, sombre drones of 18 Days; it’s a busy, chattering attack of neurotic cyber-typewriters, printing out texts for the end of the world. This is one of the more dynamic and cinematic pieces in his repertoire; extremely exciting. Technically, it reflects the composer’s acquisition of an 8-track tape recorder and his use of multi-channel composition. Emotionally, it reflects his anguished divorce. At 35 minutes, this unsettling gem would make a corker of a vinyl release and is worth your money on its own terms. ‘Chant 10A’ is from his time at IRCAM, using their equipment; and although the polished and professional surface is admirable, I already miss the rugged, gritty style which characterises his own home-grown material. Listening to this one is like taking a slow-motion deep dive into a swimming pool full of blue jelly. If nothing else, it reflects the inherent lag that still obtained in computer-music production at that time; he recalls having to wait for three hours for the machines to finish processing a few seconds of music.

At this time he’d also acquired one of the monstrous Serge synthesizers, personally built for him by the creator Serge Tcherepnin. The last time we rhapsodized over one of these huge machines – known widely as the “Tallboy” of synthesizers 2 – was in the context of Luke Fowler’s intuitive experiments on Fowl Tapes II. We get to hear its unearthly tones on ‘Nervous’ (dated 2000), where it’s combined with an Oberheim; this one amply fulfils the promises of “alienation” which most civilians find to be the keynote of this genre of music. It’s like the mournful cries of a rusty giant robot, dismayed at the bleak end-times scenario to which the earth has been reduced. The wailing sounds overhead could be nuclear alert sirens, or mutated seagulls. Technically, this has to do with “paradoxical sounds”, a technique invented by Jean-Claude Risset 3; at IRCAM, a concept which Stordeur took to Chicago where he performed this as a solo live turn.

CD 3 (not yet heard it) is quite another affair; 6 Synthesis Studies from the 2000s, reflecting his love of Indian Music which has been with him since 1968, it represents an attempt to recreate the sounds of sitar and tabla through electronic and digital means.

Received in May 2015, this is a set of rich and enjoyable music, and historically valuable. It’s part Sub Rosa (a Belgian label, need I point out)’s Early Electronic Series.