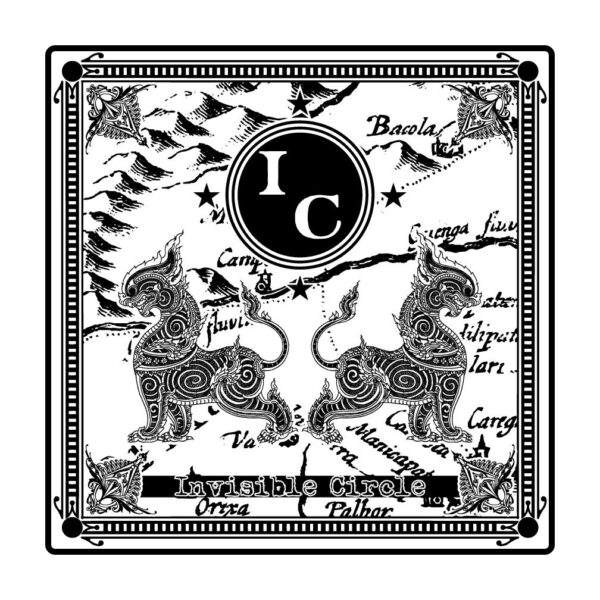 Unusual quasi-ethnic drones and songs from Invisible Circle on their self-titled debut record (GOLD BOLUS RECORDINGS GBR012)…the extremely rich drones are performed mostly by Dave Kadden, whose vision this is, using many layers of synthesiser and his oboe, aided occasionally by guest drummers and guitarists, including the wonderful Colin Langenus from USAISAMONSTER. There’s also a ten-strong vocal choir projecting the wordless vocal refrains. The extensively-travelled Kadden, who has on occasion performed in MGMT and Anthony Braxton’s Alumni Orchestra, is shooting for a vague “ancient civilisation” vibe, with the cover art depicting dragons superimposed over a map of a mountainous territory, and titles such as ‘Dead Song’ and ‘Firebird’ are clearly meant to evoke universal human longings. On the other hand, the slightly wacky back cover art is more akin to something the satirical pop-artist Kenny Scharf would have come up with, and it debunks the hidden signs and symbols of the universe by recasting them as adolescent cartoon icons. In all, this album is not exactly Popol Vuh, but Kadden’s intentions are good, even when the music makes dangerous lapses into nearby New Age territory. Arrived 6th May 2015.