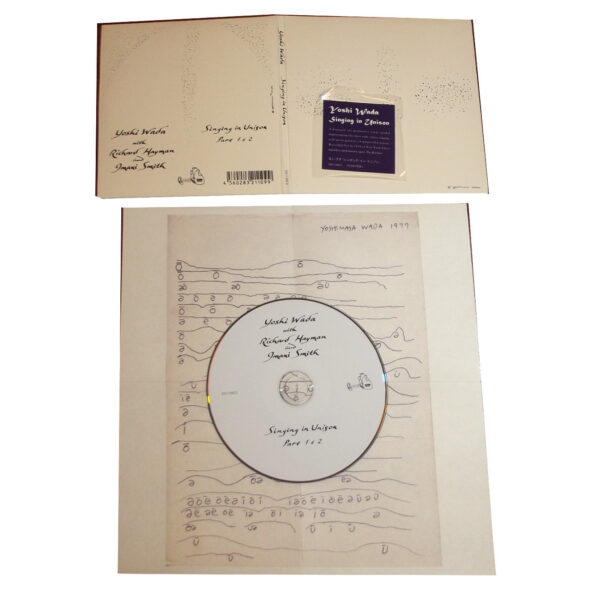 EM Records in Japan continue their campaign to keep the Yoshi Wada flame alive – they’re already reissued his “classic” 1981 recording Lament For The Rise And Fall Of The Elephantine Crocodile on CD, and brought us two other spectacular droners The Appointed Cloud and Earth Horns With Electronic Drone. For those of you who still need more output from this New York minimalist with his La Monte Young associations, here’s Singing In Unison (EM RECORDS EM1109CD), two recordings from March 1978 made at The Kitchen Center in NYC. Yoshi is joined by Richard Hayman (from New Mexico; studied with John Cage, Ravi Shankar and Philip Corner) and Imani Smith for these semi-devotional and low-pitched growlings, and Yoshi’s sleeve note reminds us of (a) his period of study under Pandit Pran Nath, the mystical Sufi fellow who also influenced La Monte Young, and (b) his childhood memory of hearing monks chanting at a Zen temple in Kyoto. He’s as true to his Zen roots as Charlemagne Palestine is to his synagogue heritage, and besides the “ritual” aspects of this music Yoshi Wada stresses the hypnotic effect of these long throaty drones, and advises us that the music “has to do with what we can communicate without words”. Even so, it’s not an essential release (and I say that as something of a Wada fanatic); the recording is rather flat and spare, has none of the full-bodied resonant echo effect that characterises Elephantine Crocodile, and born-again Beatnik hipsters will have to work a lot harder to reach the expected trance-like states. But it’s historically of value, probably the earliest document we’ve yet heard from the Wada archive, and the supporting contextual documentation in the package is up to Koki Emura’s usual standards. From November 2013.