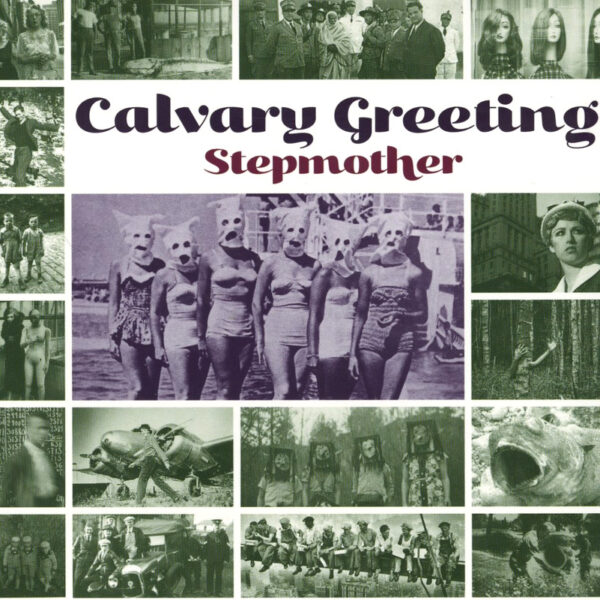 Stepmother are a high-energy slightly “zany” latterday art-rock band, keeping alive the spirit of bands such as The (EC) Nudes and 5UUs which used to be a feature of the ReR Megacorp catalogue in the 1990s…this is largely due to the efforts of head-Stepmother, Bill Gilonis, the English guitarist who survived The Work and Lowest Note in the 1980s, had various releases on Tim Hodgkinson’s WOOF Records label, and also played in The Hat Shoes, Hail, News From Babel, and Officer! In Stepmother, he’s joined by the Dutch guitarist Lukas Simonis, a true all-rounder with an indefatigable energy and range; we’ve heard him before making avant-noise with Anne Le Berge, playing madcap experimental rock in The Static Tics, and even accompanying much-loved Folk singer original Peter Stampfel as part of the Worm All-Stars. Jeroen Visser is another multi-instrumentalist who has played in Pale Nudes with Amy Denio, and he adds no end of keyboard goodiness and woodwinds to the album. Plus there’s David Kerman, the American drummer from 5UUs and The Motor Totemist Guild. Verily an all-star art-rock wishlist…

The resulting studio album Calvary Greetings (MEGAPHONE 032 / KNOCK ‘EM DEAD RECORDS 09), recorded in Zurich (a neutral country was chosen for all sorts of political reasons), is a fun-filled rip-roaring event packed with 14 tracks of dense, overcrowded music, played with ludicrous ease by the talented crew. It’s also an exhausting listen. It’s not that the music’s always played incredibly fast (although it often is), but there’s this underlying sense of urgency among the players who all have itchy feet and a breathless, rushed delivery, even when they’re not singing. There may be one too many ideas floating around the room; an embarrassment of musical riches abound, along with the need to compress them into skewed pop songs of less than two minutes or four minutes in length. I don’t want to complain too much, because a lot of this music is fresh and original, and Stepmother at their best create highly unusual sound combinations with a good deal of conviction and assurance.

Then there’s the lyrics…Stepmother have a penchant for multi-syllabic words, bizarre puns, and sheer absurd poetry, techniques which are all used to skirt around various profound topics – the Gulf War and Capitalism seem to come up quite a lot – and taboo subjects, likewise dealt with in a confusing semi-serious semi-jokey fashion. The Freudian implications of ‘Ever Wanted Your Mum’ have not escaped our highly-intelligent crew; it’s almost a song that psychoanalyses itself. To assure us that they’re not really “serious” about any of the above, Stepmother have a habit of lapsing into zaniness every so often – singing in “funny” voices (the press notes point out the Monty Python badge they wear with pride) and letting the music slip into corny show-biz clichés every now and then, just because they can.

The ingratiating grins they wear while doing this are audible on the record, probably even more noticeable if you see them live on stage. Alfred Bolland’s artwork, sourcing old photographs of ordinary people dressed in weird masks and costumes, is probably intended to assist with the overall demeanour of the work, and makes me wonder if they too dress up in zanoid fashion for their live shows. From May 2015.