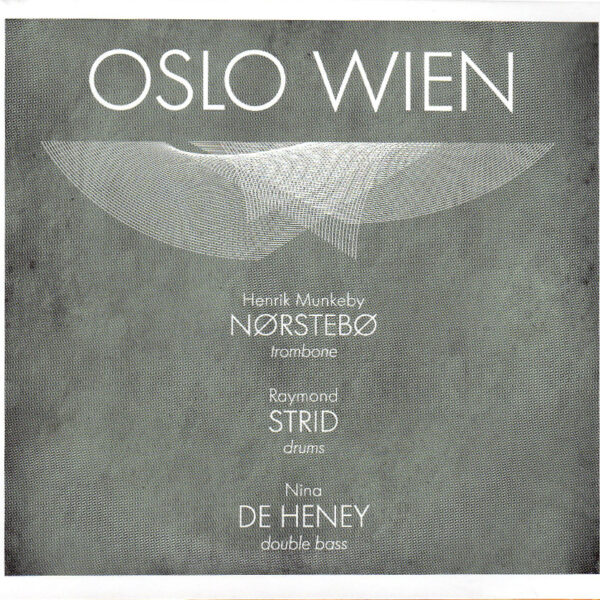 We’ve had a lot of time for the Norwegian free-jazz / improv band Lana Trio (basing our assumptions on just two excellent releases), so it’s great to hear from their trombonist Henrik Munkeby Nørstebø, a talented young fellow who also adds his lungs to As Deafness Increases. On Oslo Wien (VA FONGOOL VAFCD014), we’ve an entire double-CD of recent live performances from March 2014 with another Nørstebø side-project, where he’s supported by the Swiss bass player Nina de Heney and the Swedish percussionist, Raymond Strid. It’s great to hear a band like this really have the room to stretch out, and with five long tracks from Oslo and two even longer tracks from Vienna, you’ll have the time to savour the interplay of this very successful unit.

The two main strengths of all this music have already been identified in the useful press release, but let me try and re-explain them in my own words. (A) the ability to do the “tension and release” thing. This refers to the way the trio can remain locked in near-stasis for long periods of time, playing very little or playing virtually nothing, yet still keeping the music going somehow; then suddenly erupting into passages of great hyper-activity and high-energy freeform playing. (B) The fact that while they do this, nothing is sacrificed in terms of the music’s intelligibility or clarity. “Small details almost always can be heard,” Henrik points out helpfully. Both of these claims are fully borne out by what I hear on this strong record.

I think with (A), it’s incredibly hard to do this in a live environment without wanting to break character, move on, and start to make yourself heard with your “brilliant” contributions; the restraint of Nørstebø, de Heney and Strid is therefore impressive. Likewise to be able to do this “telepathically”, and make it into something repeatable, is surely the golden ideal of most musicians who play improvised music. Would it be going too far to wonder if we’re hearing the promises of Company Week and Incus made good at last? As to item (B), I’m sure we’ve all heard any number of free-jazz explosions and improvised blart-fests where the players are just getting in each other’s way, and (despite the pledges made in the name of ego-less music) there are one too many superstars on the stage wanting to seize their moment. Net result: listener can’t make out a thing, but is at least aware of a cloud of dust resulting from the punch-up. Again, our Norway-Switzerland-Sweden axis seems to have overcome this particular blight, and I defy any listener to find evidence of a single fudged note or overcrowded moment on the entire two discs.

Of course we could add that the music does have a “Nordic” flavour that you won’t find in Afro-American free jazz or any of its derivatives, and this is a sombre, monochromatic listen in places, tending towards the introverted and contemplative. None the worse for that, though. Recorded by Thomas Hukkelberg in Oslo and Alexander Yannilos in Vienna, with mixing-mastering by Giuseppe Ielasi on disc one. Add to this a Lasse Marhaug cover, and it’s an irresistible package, one of the finest free improv recordings you will own. From 9th March 2015.