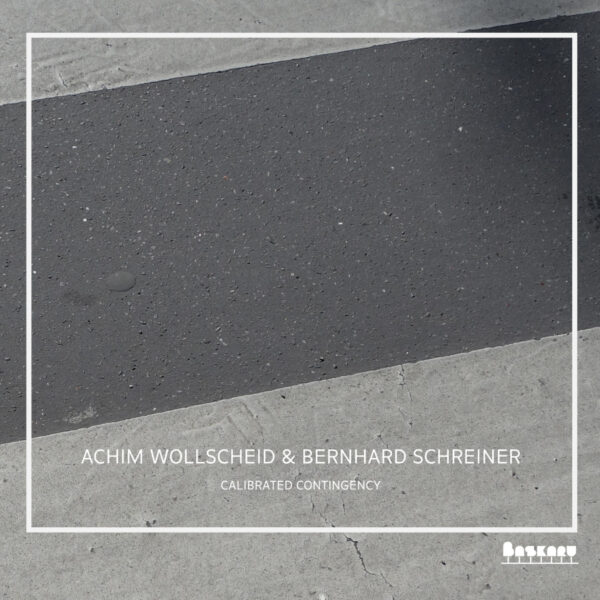 Wollscheid & Schreiner’s Calibrated Contingency is a variation on the traditional stereo presentation of live performance; here is an event defined as two stereo performances, or a “four-channel concert”. The musicians were apparently separated by a wall of some kind, so there could be no visual communication between the pair during their performance. Despite this, and impressively, they both manage to come to a full stop briefly at around the 18 and a half minute point. Calibrated Contingency is 45 minutes long in total.

I like that they’ve left some of the audience chatting before the performance begins at the beginning, which really sets the scene that you are about to witness a live event.

There are some beautiful harmonising electronic tones from around six minutes (whether this is deliberate, rehearsed or simply a happy accident is impossible to tell, but it works great), and mostly I’m guessing that the sounds are variously software generated, electronic, synth-derived, pitch fx and so forth. But without the extreme dynamics and brutality of, say, Russell Haswell or Thomas Korber, perhaps. The pair are unafraid of crunchy distorted noises here and there. These are occasionally treated with software delay effects or pitch manipulation which are often audibly over-processed, you could say; at least for my tastes, but overall the sound images are strong. Industrial machinery powers up and down in a kind of hi-fidelity, super-polished version of what the UK’s Ben Gwilliam is doing live currently. At a concert of his I attended recently, armed with only rudimentary tools, Gwilliam’s mastery of frequency manipulation made me fear, not only for my hearing, but for my sanity as well. Wollscheid & Schreiner are a little more polite.

A modulated vocal sample is introduced at 16 minutes, but I am regrettably unable to discern what is being said. After a brief halt at 18:30, things proceed in a more restrained manner. Hiss and crackle seem to be keeping something infernal just below the surface. Steroided-up miner bees? Around 26 minutes it gets a bit more violent; it sounds like they are running tape over multiple heads manually and passing the results through several broken distortion boxes at once. The mains hum alone makes me fear for the venue’s PA. Then, just as its about to get all too much for me, it is back to polite scratching noises with what sounds like a cracked kids’ keyboard running superfast arpeggios in the background.

An enthusiastic response at the end from what sounds like a small crowd – a reality arguably all too predictable for this kind of music as anyone who has attempted to promote concerts of a similar ilk will know only too well – is nonetheless a little disappointing to hear, given the quality of the sounds on offer and the cohesion of the interplay between the two musicians.