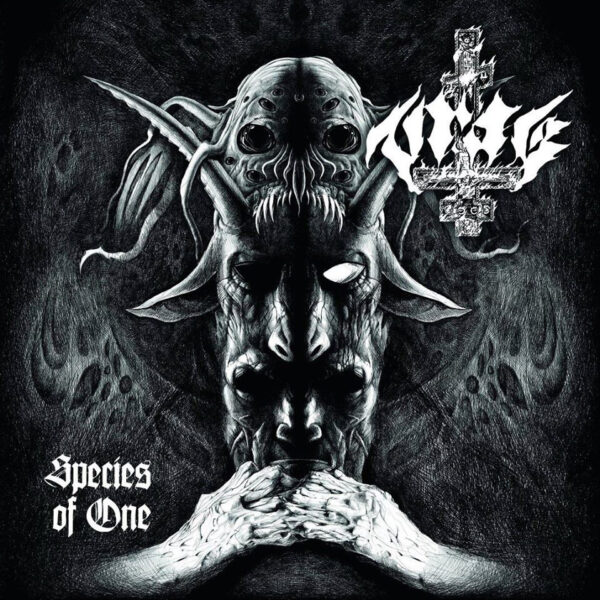 If the music industry had awards for sheer determination and persistence, Australian BM band Vrag would certainly qualify for one; this band in its various forms, revolving around guitarist / vocalist Vrag Moj, has existed since the late 1990s. Vrag was originally based in Sydney, recording several demos, compilations and its first album “Black Plague of Extinction” there, but in the last few years Vrag Moj relocated to Hobart in Tasmania and established Vrag anew. “Species of One” is the band’s second album and its first for a label (Schattenkult Produktionen).

This is a work on the attack, always on the alert, crackling with energy and fuelled by a scornful attitude towards Homo sapiens and the great havoc humans have brought to planet Earth. The disdain for organised religion, the contempt for sheeple always following the herd without thought for the consequences, alienation, madness and defying conformity and being free among other things are all grist for Vrag Moj’s mill, expressed in succinct lyrics he either sings or spits out with filthy slavering relish bordering on the deranged. Songs are short, streamlined and punchy, and dominated by the singing. That’s not saying the music merely serves as a backdrop: most songs have riffs, melodies and strong rhythms that define them, making them potential singles material, and a definite groove is present on tracks like “Ahasver” and “Vagrant in the Astral Plane”. Although the production on the album might be basic, it is clear enough that very discreet ambient effects can be picked up, as on “Ahasver” where tiny licks of synth tone give a cold feel to proceedings.

The music might be best described as a mix of black metal (the dominant style) and elements from death, doom, grind and melodic hard rock. Earlier tracks showcase Vrag as a straightforward old school BM band, trampling on the things that humans have done which make them undeserving of inheriting the Earth, while later songs from “Madman” on seem much more personal and have more complex music and mood, along with a definite rock’n’roll feel.

Even though the songs are short and straightforward in musical delivery, there are little surprises for those who listen to them very carefully. I think some of the middle songs like “Madman” and “Vagrant …” could be a little longer than they are: when some songs have so much vitality and electricity in them, anything less than three minutes feels like a decapitation! One big surprise is the completely space ambient “Interlude” – it seems a shame that it’s less than a minute long and is an unassuming piece.

I’m in two minds about the quality of sound and production: the songs might have benefited from a better production with a deeper bass sound. On the other hand, this might rob the music of some of its raw, primitive BM quality. There is a ragged, desperate quality that is worth preserving and better sound and production might make the music seem too polished.

Moving to Tasmania and regrouping with a new set of musicians have definitely given the Vrag project a new energy and positive outlook. The music now has a distinct tough flavour while staying raw, primitive and crazed.