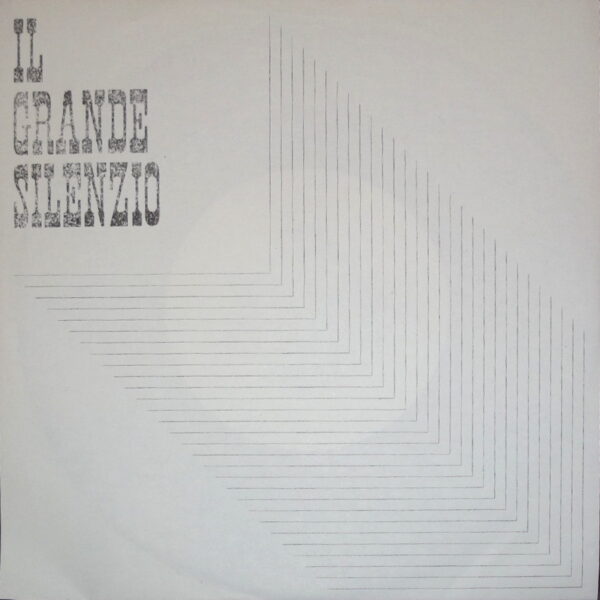 The Belgian label Meeuw Muzak has been home to enjoyable and unusual examples of far-out electropop, vocal, and novelty records calculated to appeal to the contemporary hipster. The single by Il Grande Silenzio is a complete departure from that lineage. Played by the duo of Atsuo Ogawa and Minoru Sato, “Dry Lake / Empty Kettle” (MEEUW MUZAK 044) is a puzzling minimalist statement that on early spins seemed to be a completely futile exercise. But the press notes remind us of Meeuw Muzak’s “journey towards unspecified horizons, leaving the footprints of a different animal each time”. If you accept this rhetoric, then you have no choice but to join the hunt.

What we hear is Ogawa’s banjo plucking mysterious single notes in isolation, much like a renegade country-folk rendition of Stockhausen’s Klavierstucke. In the background, Sato is providing an electronic backdrop so minimal it can barely be said to exist. While there’s slightly more pulsating energy discernible on the B-side, he’s still pretty much absent from the room, as if he’s still stranded at the airport while his partner is already settled in the hotel. The duo don’t have much of a track record to date; there’s a 2012 album on Two Acorns from Japan, on which Sato plays something called a RP3M-Roll Paper Punching Program Machine, which must cause a riot on stage. I’d liken it to Keith Emerson’s big Moog. There’s one track on there that lasts for 19 minutes; one LP side’s worth of bleak emptiness. Long durations, slowness, inexplicable silences are the order of the day; both players appear to have backgrounds in contemporary gallery art, and they like simplicity, repetition, and pushing things to extremes.

There’s a press note included here written by Pete Um, one of C. Joynes’ many mystico-genius buddies who form a current Cambridge underground “scene” that I wish I knew more about. He makes a very good case for this record and in many ways pre-empts any other interpretation one could possibly bring to it. The name Il Grande Silenzio, you see, is also the title of a Spaghetti Western 1, and it’s perfectly within the rules to hear this record not only as a stripped-down version of a Morricone soundtrack to that film, but also as a re-enactment of any given scene from that movie. Hence, the tension, silence, and what Um calls “the unfolding of a narrative you can’t fully comprehend”. While it’s fair to say he’s reading a lot into it, his version of events is valid. He also draws attention to the presence of the banjo, an instrument rarely deployed in the context of free improvisation or avant-garde music, and speculates about the ramifications of this choice. But I think the duo themselves have already expressed all of this simply and perfectly with their Soundcloud hashtag, “#Extreme Folk”. From 10th October 2014.