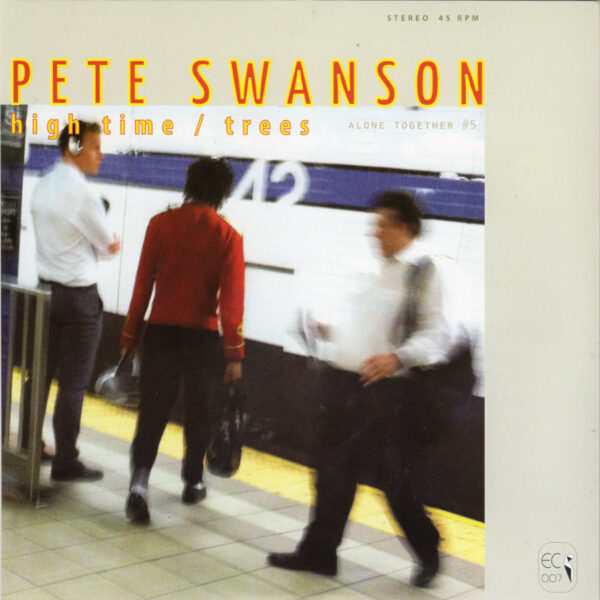 The latest instalment in the Alone Together Series of singles from Emerald Cocoon is by Pete Swanson, who’s been steadily establishing a name for himself as purveyor of extremely melancholic and harrowing music since the demise of Yellow Swans. His High Time / Trees (EC007) may have started life as simple acoustic guitar ballads, a sort of mirror-image underground version of Terry Jacks or Tim Buckley, but what’s ended up on the grooves is a thick, clotted sound arising from distortion, overdubbing, and other studio distancing strategies. Even so, the label assures us, there is still an audible “room sound” that shows the simple, natural origins of these recordings. Both songs are Swanson’s tribute to New Zealand underground rock, of which he’s a devotee. ‘High Time’ was originally recorded by Dadamah in 1991 and released by Majora as the B-side of the Nicotine single; Peter Stapleton and Roy Montgomery both featured in this important NZ band. ‘Trees’ is a more recent offering by Gate, plucked from their 2010 album of techno-ambient gloomery. In both instances, Pete Swanson transforms the songs into introverted hymns of loneliness, building a claustrophobic sound through entirely acoustic means, and delivering a pained scenario where the protagonist is so alienated and numb that they’re no longer aware of anything but a distressing, emotional confusion. The bewildering cover images (especially the back cover) merely add to the general sense of disconnect. From 30th January 2012.