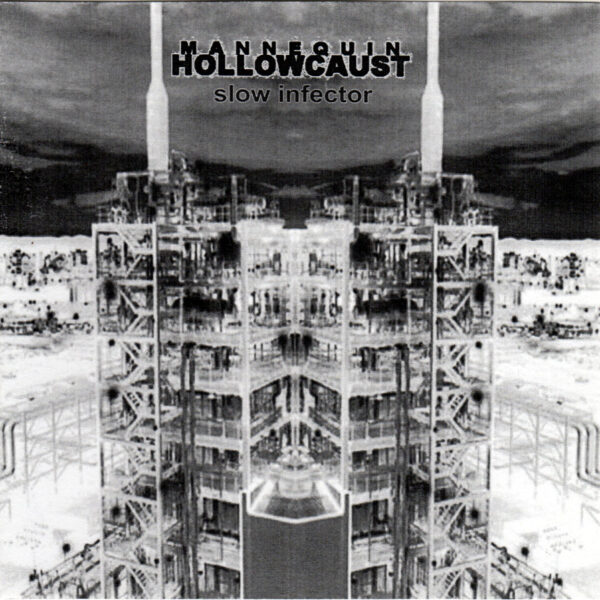 Mannequin Hollowcaust’s ‘Slow Infector’ (STAND UP TRAGEDY RECORDS SUT14 / HEAD DESTROYER MEDIA HD08) is a magnificent instance of industrial horror-noise with a message…we received a copy direct from Bryan Lewis Saunders, for which I am grateful as we’d never have discovered it otherwise. Saunders helped with the production in Tennessee, but Patrik Dougherty is the man with the ultra-pessimistic vision of doom which he unleashes on this terrifying record. “It is about how he lives right next door to a chemical factory,” reports Saunders. That’s the factual view, but Dougherty has a much less equivocal story to tell. “This record was recorded in the shadow of a giant BEAST a snarling & unrelentless MACHINE belching out its disease and spewing its filth into our land”…is how he begins his polemic, inserted as a text with the release, said text a combination of typewritten and hand-scrawled ravings indicative of a highly preoccupied mind.

Continuing, he speaks of death and blood perpetrated in the name of dollars, and how the entire town is kept in a state of permanent fear; as extreme a Marxist critique of modern industry as you could wish for. The cover images pick up this theme, particularly the back cover which superimposes belching chimney stacks with diseased skeletal zombie faces, eyes and mouth running with blood. Not especially subtle perhaps, but there’s no mistaking Dougherty’s impassioned and desperate message here. The sound of the record itself is pure industrial terror; it emulates the noise of factories, naturally, but it also clogs the air with poisonous toxins and evil sonic substances, creating psychic mayhem in your ears, and thus amply delivering the main bullet points of his polemic in aural terms.

The B-side, titled ‘The World is a Wasteland’, indicates that this unstoppable force is no longer confined to his hometown, but has already laid waste to the entire planet. When I was in America in 1970, I recall that ecology was one of the strong post-hippy themes of the counter-culture 1, but that old-school beads, sandals and Mother-Earth imagery seems positively quaint compared to the monstrous ravages that are implied on this recording, suggesting strongly that urgent action is needed. A joint release on Stand-Up Tragedy and Head Destroyer Media, and very good indeed. From around 2013.