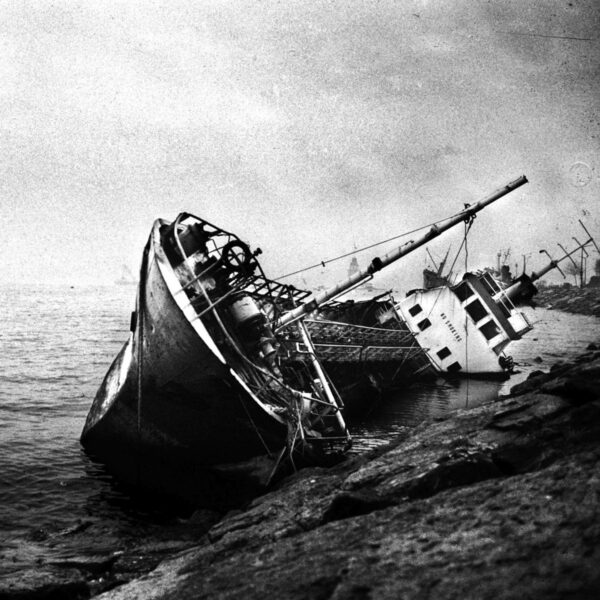 The album ÜTOPIYA? (SUB ROSA SR396) by French intellectual free-rocksters Oiseaux-Tempête is slowly growing on me, despite early spins where the veneer of “respectability” seemed to create barriers – too much in the way of polished production, portentous ideas, and pretentious lyrics. What I’m liking on today’s spin is the soggy, miserable atmosphere that blights every track – and it’s not just the minor keys in which the tunes are set, nor the empty bombast of the playing (especially the drumming), nor the narrow restrictions of the meagre constructions, the melodies which bind you in rather than set you free…there’s some deeper malaise, some severe disappointment at work here, a cynicism informing every gesture of these disaffected late-romantic decadent types, traipsing about in crushed velvet suits with their mouths full of moss and raw fish.

The core team seems to be Frédéric D. Oberland and Stéphane Pigneul – and Oberland is certainly the last person you’d expect to be leading a stoner / doom band, with his composerly and sound-art credentials, not to mention his porcelain moustache cup, and yet here he is slashing an axe with vigour, leaning on a mellotron until it collapses under the weight of his pallid hands, and supplying “dark energy” – the sort of idiotic credit that only the most posey musician would have the audacity to print on their album cover. Both he and Pigneul are members of two other bands which are probably great to hear, but look at those band names – FareWell Poetry and Le Réveil des Tropiques – both of ‘em steeped in ideas filched from post-Surrealist books of engravings and dismal prose, which abound in the flea markets of old Paris. Ben McConnell, their drummer, also can’t get over his own literary aspirations since he used to play in a band called Au Revoir Simone, and has also played with another self-regarding semi-goth type with long black hair, Marissa Nadler.

Even so…this album wins me over partly through addition of star player Gareth Davis with his bass clarinet, shining well for instance on the long third track where his instrument gives the “woody” flavour of pipe smoke and freshly-turned earth we all crave, and the whole enterprise starts to gel – at which point Oiseaux-Tempête perform like an intellectualised version of Isis with the addition of Lindsay Cooper. This is the third album the band have made for Sub Rosa, and it’s got something to do with their “existential turmoil” brought about in their hearts in response to the economic crisis in Greece. To further this concept, Frédéric D. Oberland has decorated just about every surface of this 8-panel digipak with his moody, arty, photographs – dogs, skulls, crabs, anything so long as it’s loaded with “significance”, and even depicts a capsized ship on the front cover, no doubt continuing his critique of the world banking crisis. Profound, non? Then there’s the track titles, each one aiming to be a mini-essay packed with resonances and mini-ideas, or else chapter headings to a turgid book of philosophy. ‘Portals Of Tomorrow’ is a classic in that regard, but how about ‘Someone Must Shout That We Will Build The Pyramids’?

In sum, this release may be slow, gloomy, impenetrable, and over-thought in a way only the French brain can manage, but musically it’s still a convincing stab hitting the heart where it hurts with its depressing, rain-sodden free-form stoner rock mixed with foreign / weird field recording elements and oh-so-graceful acoustic melodies. From May 2015.