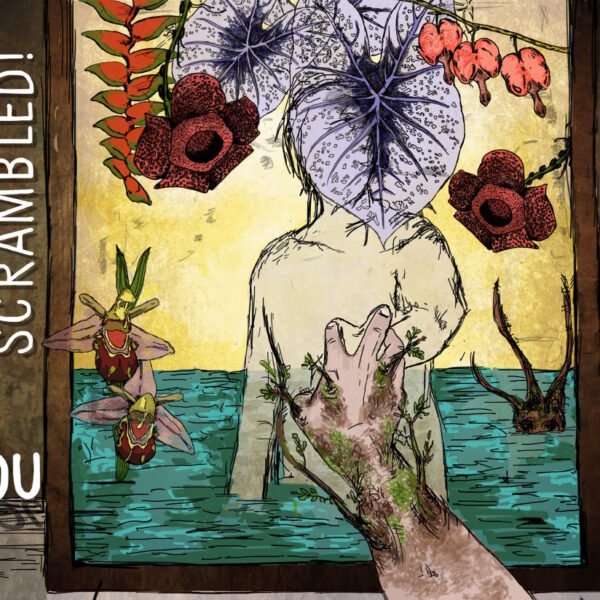 Feeling mildly entertained by Scrambled! (SPOOT 2015OU / PUBLIC EYESORE PE132), the second album by OU, a small band of chamber musicians who appear to be mostly Italian but are based in Seattle; this record of nine songs, composed mostly by Ersilia Prosperi, was produced by the talented Amy Denio who also supplies woodwinds and backing vocals. OU play a species of ingenious circus-jazz not unlike the Kiv Orchestra or (to be even more obscure) Vladimir Bozar ‘n’ Ze Sheraf Orkestär. OU are not self-consciously wacky, but one can’t avoid the word “quirky” in attempting to characterise their lively combinations of musical styles and playful, unusual lyrics – sung in French, Italian, and English, mostly by Martina Fadda with interjections from Claudio Mosconi and other band members. The aesthetic ground rules for singing in OU require mannered enunciation, dramatic exaggeration, and a certain coyness in delivery that threatens to tip each song to the wrong side of irony. However, this is more than compensated for by the expertise of the musicians, who play unstintingly original arrangements with their small chamber ensemble of brass, percussion, keyboards and many other instruments. The coyness extends to the band bio; they aren’t keen on telling us much about themselves or their intentions, and instead offer cod-surrealist writings such as “OU comes from the far future, like a signal for our generation.  Spotted at the circus, in a jazz club, in line at a mall during Christmastime, singing and laughing with a group of pygmies, partaking in a Thai cooking class.” It’s not easy to make music that lives up to a description like that, but OU sure give it their best shot. From June 2015.