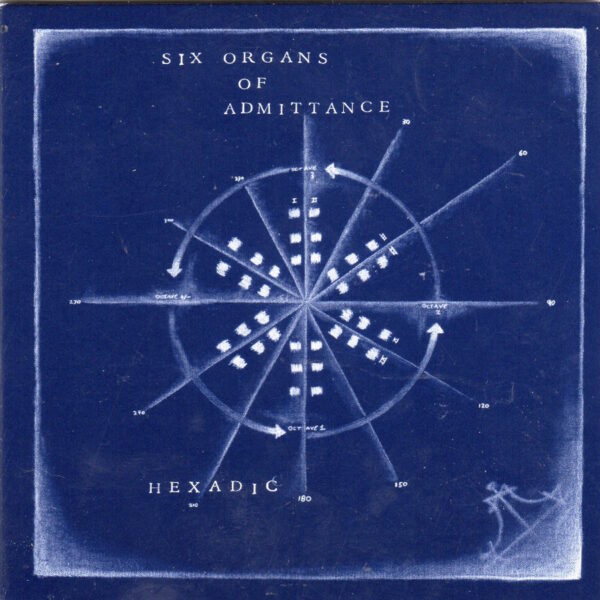 Don’t think we’ve heard from Ben Chasny and his Six Organs Of Admittance since 2007’s Shelter From The Ash, so his crazy and highly innovative rock LP Hexadic (DRAG CITY DC616CD) is most welcome at this time. He’s certainly come a long way from his acoustic-guitar explorations such as 2002’s Dark Noontide, and this 2015 release is quite the rock beast, roaring like an animal with the help of a backing band that includes not one but two bass players with their heads dipped in wet cement, a drummer who is actually a dinosaur, and Chasny’s own Haino-influenced over-amped guitar screech pouring out of amplifiers made out of decommissioned electric chairs. Each song is relatively short, but highly dense and elaborate, conveying more musical information per square inch than an atomic compound of precious and rare metals, and through his art Chasny manages to compress into five or six minutes what Fushitsusha require a whole double-CD to achieve.

We find much to enjoy in the sprawling, unpredictable structures, that may appear akin to heavy rock / doom metal music on the surface yet they depart strangely from most known codes and conventions of our favourite genres. Even the vocal parts are bizarre, inserted into the gaps at the most unexpected and inopportune moments in each piece. What may appear like happy accidents and spontaneous improvisation is, however, planned to some degree, working to a new method of Chasny’s devising. He calls it the Hexadic System. Does it have any resonances with Z’EV and his rhythmajik? Probably not. It’s intended as a method of musical composition to free himself (and other musicians) from the burdens of over-familiar tropes, riffs, and default settings; the key operational phrase is “replace calculation with indeterminacy”, according to the press release, and even the choice of that word indeterminacy indicates that Chasny is at least familiar with the approach of John Cage. I haven’t delved too deeply into this method, but a quick glance shows that it uses playing cards as a basis, and I expect other writers have found consonances not only with Cage (who used the I-Ching, which very coincidentally also has the number six as a root basis) and with Brian Eno and Peter Schmidt’s Oblique Strategies, which might not have had anything to do with number six but did involve cards, and was likewise an attempt to assist the artist to surprise oneself, to overcome mental blocks or minor crises in creation.

On this album, simply being aware of this structure’s presence is enough, so that when listening the underlying foundations or discipline is evident, whether or not its actual construction becomes apparent. It’s paid off in dividends; most tunes on Hexadic deliver a concentrated wallop of angry rock punch, and even the quieter moments are highly compelling, such as the mostly acoustic ‘Hesitant Grand Light’ which passes on a disquieting mood through its mixed chords; the bleak and icy ‘Future Verbs’ which has a lead guitar sound sufficient to re-freeze the Polar ice caps; and the teeming mass of ‘Vestige’, which in less than five minutes undermines the vast and pompous guitar-orchestra constructions of Glenn Branca with its intricate and discordant shimming drones. A solid piece of avant-rock craftmanship, this. From 11 June 2015.