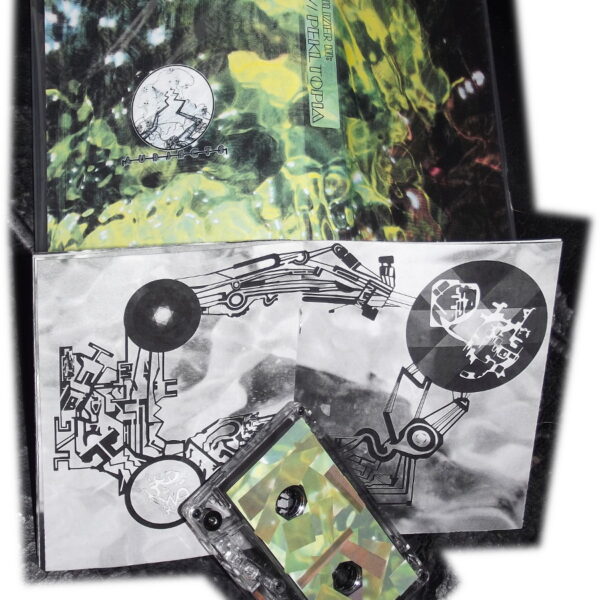 Another cassette from the Aubjects series, this one having nothing to do with Amalgamated or its members. AUJX-5 is a split between STRNGLV and Pekltopia and it’s #III in a series called Noosphertilizer, which has nothing to do with the German Psy-Trance duo Noosphere nor an album by this name by the Russian droner Bardoseneticcube. STRNGLV, or Strangelove, is a fellow from New Jersey and while he’s very much in orbit in the outer-space cosmic psychedelic vibe which clearly preoccupies this label so much, he also tends to over-equip his spacecraft with many dials and knobs, and stows so much heavy cargo in the hold it’s a wonder the flivver can even take off from the launchpad. Sometimes it cannot, and just lies there puttering away in a pile of digital output. He’s good with textures and beats, and he certainly likes his filters, but he rather overuses these tricks on the seven tracks allotted to him here, and one searches in vain for a clear or uncluttered idea. However, the press notes speak warmly of Sean Keane, who is also a collage artist, making use of old-school analogue equipment along with software manipulation, to produce his slightly distressed and treated sounds.

At least STRNGLV has beats, rhythms and patterns, and on today’s spin his side is thus preferable to the lukewarm offerings from Pekltopia. Over-familiar sounds are propelled by uncertain performances, where the ideas lack a sense of purpose or focus. “Beautiful, intimate and dreamy guitar sketching against intuitively tuned-in textural backdrops,” is how the press describe this meandering music. I am surprised to learn that Ashtray Navigations made a split with this band, which was the first item to be released on Yogoh Records in Japan. The release is packaged in a box with another collage booklet by D. Petri, this one mostly full of green smears and blurred images, sometimes overlaid with cryptic hieroglyphs and symbols which we are probably meant to take for alien messages from another world. Sadly, I am generally disappointed by the flat surfaces and lack of ambition in this release, making it an unsatisfying listen, despite the occasional successes it enjoys with its unusual sonic textures.