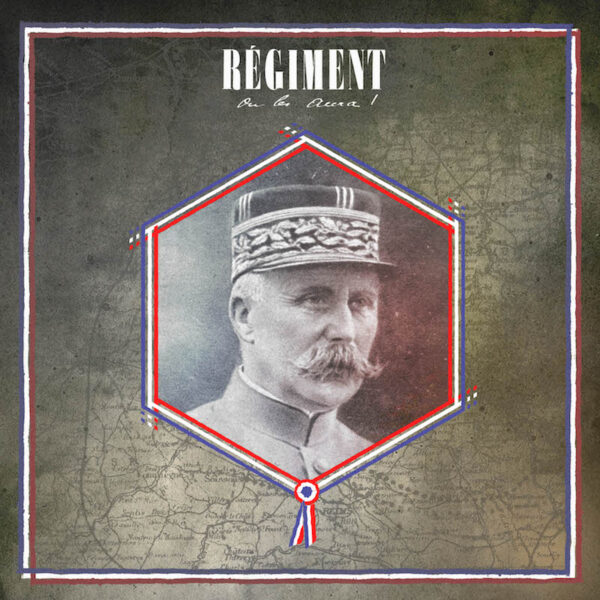 Regiment is a new band but each of its four members has been involved in various other French black metal bands and projects including Astaroth, Vintergeist and Peste Noire. The debut album “On les aura!” centres around life and death in the trenches of World War I (1914 – 1918) as experienced by French soldiers; the band members’ interest in this theme stems from their interest in World War I memorabilia kept by their families. The album tries to capture something of the feelings, views and opinions held by individual soldiers who fought and died in the war, and perhaps through that come to an understanding of why so many young men willingly volunteered to fight and die in a war they had very little knowledge of and whose aims were never clearly communicated to the general public. Only when news of how many thousands of soldiers died in the most disgusting and degrading circumstances, often for reasons that had little to do with achieving the war’s objectives and more to do with the incompetence and indecision of military generals, reached the public did public attitudes towards the war start to change.

Between the first and last tracks which are field recordings, the album is aggressive and powerful blackened death metal with hyper-fast percussion that almost goes into a thrumming blur along with blood-curdling vocals. Most songs belt out catchy melodies, searing guitar riffs and crunchy rhythms, to the accompaniment of pounding drums. The vocals are not clear and are submerged in the galloping music, which is a pity because the songs are very strongly based around the lyrics. The best tracks start about the middle of the album with “La mort du Negre”, a song dedicated to a mortally wounded African soldier fighting on the French side, lying next to his dying German enemy and feeling pity for his suffering. The track quickly builds up speed, energy and head-banging power throughout with plenty of lead guitar spark in its later half. If Regiment had to choose a song from the album to release as a single, “La mort du Negre” would be the obvious choice. “En avant!” is not quite in the same league for sheer energy but expresses a wider range of moods and emotions including sorrow and terror. “Des Capote a la Popote” is a straight-out death metal gallop of jagged textures and frenzied rhythms.

French speakers will get the most value out of the album though they’ll need lyric sheets as the singing really is indistinct under all the thunder and fury. The rest of us can follow the powerful music which can be very overwhelming – perhaps a little too much so, if the objective is to show listeners what French soldiers might have thought and felt about what they were fighting for. The band sticks to a technical style of blackened death with an emphasis on melody and songs, and there is not much room for experimentation with sound or blending in field recordings of war ambience with the music. Overall this is a good technical black / death metal fusion that sticks to the tried-n-true standards but which offers little that’s new musically. I have my doubts that “On les aura!” will be of much value as a war metal album, and as a recording that has something original to say about war and people’s attitudes to war generally.