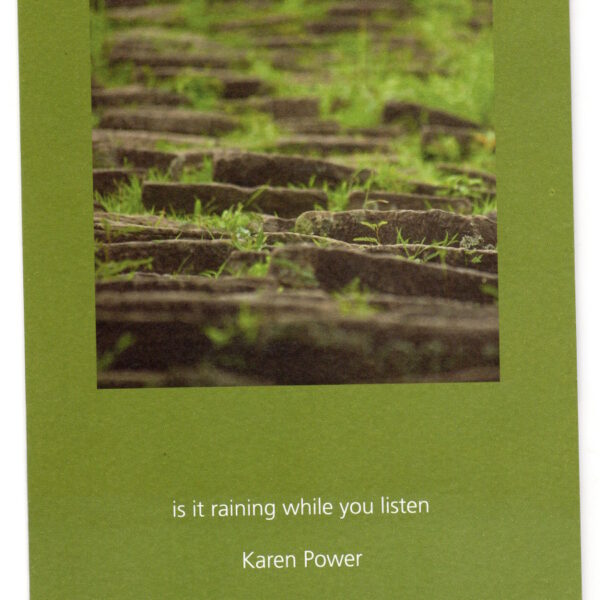 A lush handful of foldout A5 packaging from Farpoint Recordings, containing a cd on which all of the featured pieces of Karen Power’s music are consistently well-recorded, giving the impression that it could be one big suite of music. However, it isn’t. All the pieces are realisations by different musicians including SCAW Duo, Mmm Trio, Quiet Music Ensemble and the Nova Ensemble; which is the earliest recording presented here, from 2007. That it fills almost the entire capacity of an 80 minute cd certainly offers good value in exchange for your hard-earned and ensures an immersive experience for those who don’t necessarily want to do their listening piecemeal.

Power’s website front page sets out her stall: “I use two primary sources in my creative output, acoustic instruments and everyday sound-objects and soundscapes”. The music on Is It Raining While You Listen straddles two worlds; the worlds of modern composition, and of contemporary composition (these are my terms but you will know the difference). The second of which is changing slowly; moving almost imperceptibly toward the first. Remember, non-traditional, shall we say, musicians such as Steve Beresford, Adam Bohman, Keith Rowe, Dimitra Lazaridou Chatzigoga, Patrick Farmer, Dylan Nyoukis and Karen Constance have appeared at The Proms, even if it was specifically for the John Cage Centenary concert in 2012. Power’s work is neither tied too tightly to 20th century composition, nor as forward-thinking (or risk-taking?) as her contemporaries from the Wandelweiser collective, say.

The first piece ‘hang on, I’m not ready for a pig yet’, begins by channelling Ligeti’s ideas for massed voices demonstrated on his Lux Aeterna before devolving into small groupings of violin courtesy of Claire Duff who plays baroque violin. For the curious, as I was; a baroque violin differs subtly from modern violins, in terms of size of neck and tailpiece, but perhaps the most important differences are that baroque violins are always strung with gut rather than metal wound strings and are played with an earlier non-Tourte design of bow and without a chin rest. The next piece, ‘the colourful digestive palette of slugs’, realised by SCAW duo, is a combination of held notes from Sarah Watts’ bass clarinet and Antony Clare’s piano playing which, at times, sounds like he’s battering it with a blunt object, rather than playing it in the traditional sense, which is all good in my book, obviously.

The title track ‘is it raining while you listen’ is performed by the Mmm Trio, Reiko Manabe on alto flute, Kaori Ohsuga on piano and Shungo Mise who plays violin. A swift bit of digging on the internet indicates Mmm Trio also feature Canadian composer Daryl Jamieson, but he is not present here. The piece proceeds in a largely meandering jib, with occasional stridency, most often from the direction of the pianist. This sets a mood for the remainder of the disc; one of slight unease in this listener. Track four on this disc is listed on the sleeve as ‘flies who dreamt of more than windscreens’, but seems in fact, to actually be ‘forever ricefields’. No matter – ‘forever ricefields, (“tape”)’, begins with a recording of night-time crickets and waterfowl, no doubt located somewhere far more exotic than my own semi-rural position, (and therefore welcomed), and is, despite its risible title, one of the more successful pieces on this collection for me. There is a rich seam of cowbells (mildly processed in places?) that runs through the entire piece – great if you like cowbell – and there is little in the way of dynamic. This does nothing to dim my enjoyment of the piece, however.

Sounding more like the product of an institution like STEIM or IRCAM is relocating elk…by train , a piece for wind instrument and pre-recorded material this time. Carin Levine takes care of the performed aspect with her bass flute, bringing a sense of vertiginous space to the claustrophobic prepared material. Another distracting, (for me), title in squeeze birds to improve your garden’s plant variety , which features more sub-Ligeti moving tones performed by Nova Ensemble, whose constituent membership is left unspecified (there are Nova Ensembles based in Western Australia and North Texas; it’s not clear if either of these is the one at work here). Finally, fried rice, curried chip and a diet coke , another composition for “tape”, sets digitally processed vocal recordings against each other. Laughing, belching, ticcing, hiccupping, hissing;in a variety of not exactly unpleasant ways. But whichever way you look at it – that’s a lot of carbs.