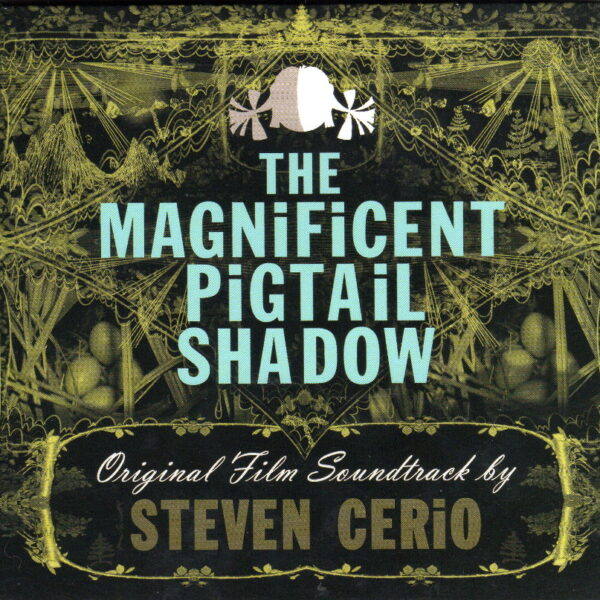 The Magnificent Pigtail Shadow (WOW COOL 24-034) is an ambitious work credited to Steven Cerio, the talented New York artist whose drawings I think first passed our way in the pages of Chemical Imbalance and Forced Exposure in the late 1980s, but he’s since grown into a hard-working multi-media polymath with a healthy appetite for self-expression not unlike that of Raymond Pettibon or Gary Panter. By which I mean Cerio has done illustration, comics, posters, animations, film, stage shows, and music; he may be familiar to you for his work with The Residents, most recently for Disfigured Night for instance. He’s also been associated with the San Francisco hippy artists of the 1960s, particularly those that straddled the Underground Comix and poster-art scenes, and I think he enjoys their work too; you could discern traces of psychedelic forms in his elaborate visual work, but he takes it much further than Moscoso and Griffin, pushing into the realms of darkness and strange, unexplored territories.

Which brings us to The Magnificent Pigtail Shadow. In front of us we have the soundtrack CD, but it’s a much larger project – there’s a film (DVD available from Wow Cool), and a book of images and stories called Sunbeam On The Astronaut which is not unconnected to the project. The audio CD totally stands up as a work on its own terms, and it’s a highly distinctive statement. Cerio composed the music and wrote the text, and plays a good deal of the instrumentation himself in the form of percussion and keyboards, but also has assembled a small army of guitarists (including Marc Arsenault, who runs the Wow Cool label in California) to realise the music, along with many other musicians – playing strings, woodwind, brass, percussion, and electronics. The libretto is read out by Kristin Hersh, intoning the texts in her usual self-important lugubrious tones (I have never particularly cared much for Throwing Muses, and her contributions are a sour note for me here). The CD comprises the original score and a further 8 bonus tracks of outtakes from the recording sessions. 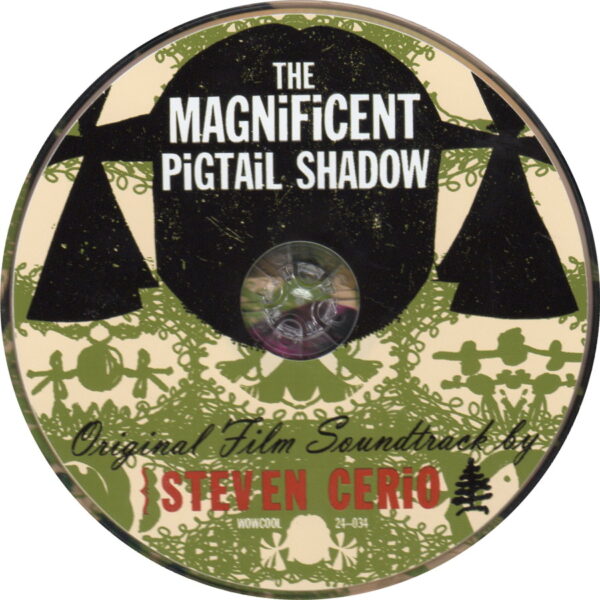 So far, the popular-prog fan might mistake this for an avant-garde update on a Rick Wakeman LP from the 1970s (who can forget the abomination that was Journey To The Centre of The Earth, with the story read out by actor David Hemmings in front of an orchestral backdrop and Wakeman’s grotesque pseudo-symphonic keyboard bombast?). But if there’s a story unfolding here on Pigtail, I’m hard pushed to discern it; no characters, no scenes, no conventional clues to narrative development. Instead, a series of surreal disconnected snapshots illuminated by meagre clues in the allusive text, and accompanied by extremely strange mood music. With its visions of animals, nature, and candy, it’s almost like a Children’s Book from the 1950s gone bonkers; Cerio’s Little Golden Book. The music is quite beautiful in places; the powerful acid-drenched opening made me think we’d be in for a modern psychedelic rock fest of some sort, but the majority of the tunes are near-shapeless experiments in drone and instrumental noodling staying in a single vague key, rich in atmosphere but short on progression. Even when instructed to “rock out”, the band deliver a wodge of melded sound and mixed chords that’s akin to a guitar-wielding version of Tangerine Dream. It’s compelling, but somehow lacks musical force or energy. Maybe that’s the point, but by end of play I didn’t feel I’d advanced one inch down any particular road, just stayed in one enchanted place for a long while. 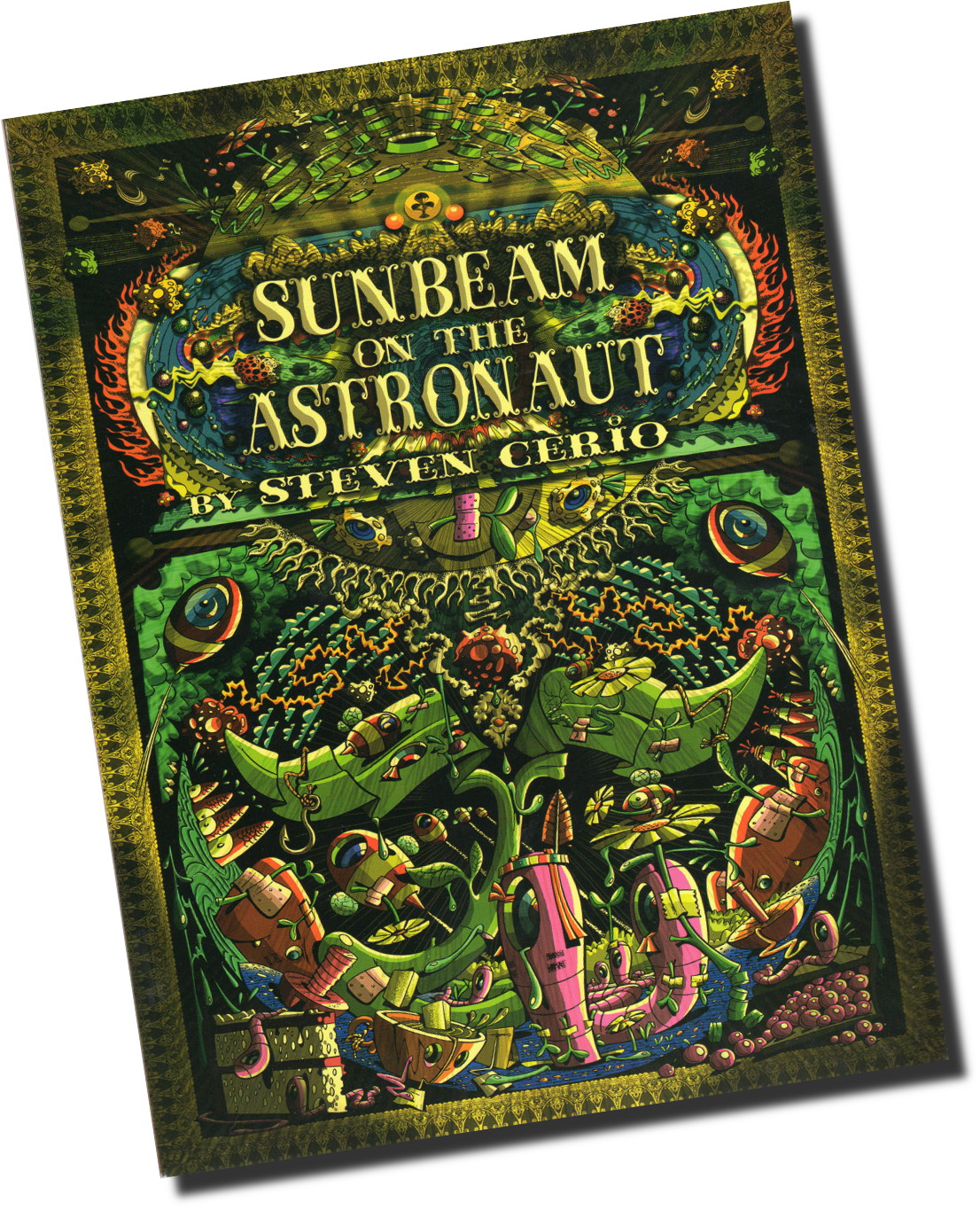 The Sunbeam On The Astronaut book is a treat for the eyes, assuming you’re prepared to spend hours decoding these incredibly intricate and layered images. Last time I looked at Cerio’s work, it was all done by hand – the obsessive pen and ink scrawls which you’d normally associate with a psychedelic artist working for 36 hours non-stop and producing highly intricate but formless cosmic visions. He’s since discovered the computer, and uses it to add vector images, drop-shadows, multiple generations of images, impossible layers of depth, and typeset captions that tell stories (or obscure them). Exhausting. Yet these bright and cartoony images don’t feel like the exact visual counterpoint to the music, which is haunted, melancholic, possessed of the stark witch-like weirdness that makes every track appear to be unfolding under a full moon. I realise I’m missing the third part of the puzzle, i.e. the film itself, so if I ever get to see a print one day you’ll be the first to know.

Many artists, including for instance the surrealist Max Ernst or the Outsider Henry Darger, have created entire worlds from their imagination, replete with impossible detail, which the viewer can get lost inside as we explore. With a work as opaque and fully-realised as The Magnificent Pigtail Shadow, Steven Cerio is surely ready to join them. From 21st July 2015.