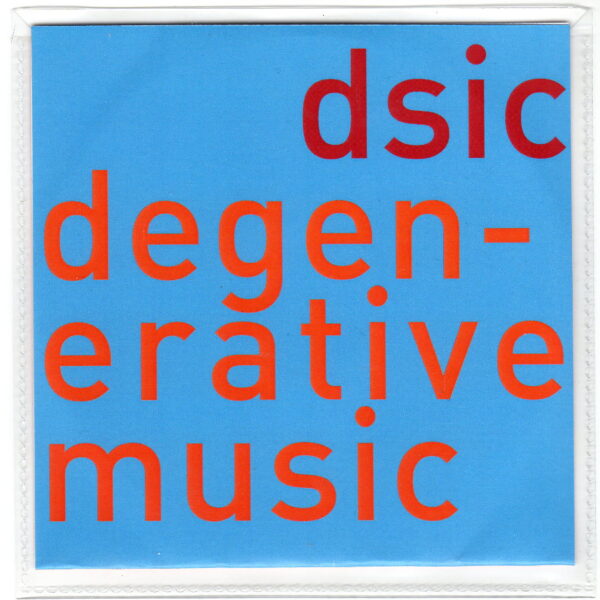 One of several new offerings from the LF Records label which arrived 1st July 2015…Degenerative Music (LF 049) by dsic is described on his website in three terse remarks, indicating that it’s computer music which has been sabotaged by its own maker…that no program can out-perform a human being when it comes to bludgeoning and flattening actions… “Crush any/all formal systems” has been dsic’s motto when assembling these six cuts of untitled, entirely abstract lumps of sizzling flashes erupting from printed-circuit Hell, many of them driven three-quarters mad by the violent disruption to logic that has taken place. We’ve recently noted an actual piece of computer music produced by generative software (the rather cold and cramped Hanz Memorial), and it’s to be expected that dsic, with his usual no-nonsense manner, has dispensed with any formalities such as pretensions to “composition” or “sound art” on this occasion. The title not only calls attention to his anti-strategy, but describes the music itself: rotting, decaying, losing its shape and coherence as motor functions and synaptic tissues start to drop away. Not especially noisy or violent when weighed up against dsic’s track record in this area, and in fact some moments create quite pleasing drones of digital porridge that are suspiciously user-friendly. Imagine if the entire internet had gone insane (which it probably has), then somewhere within the multiple banks of servers laden with spyware and surveillance scripts, there might be a corner of the hive mind whose sole job it is to keep us in a state of blind obedience through the use of soothing music. Argh…once again I fall into the trap of describing the plot of The Matrix, which shows I’m running out of ideas…time to call it a night.