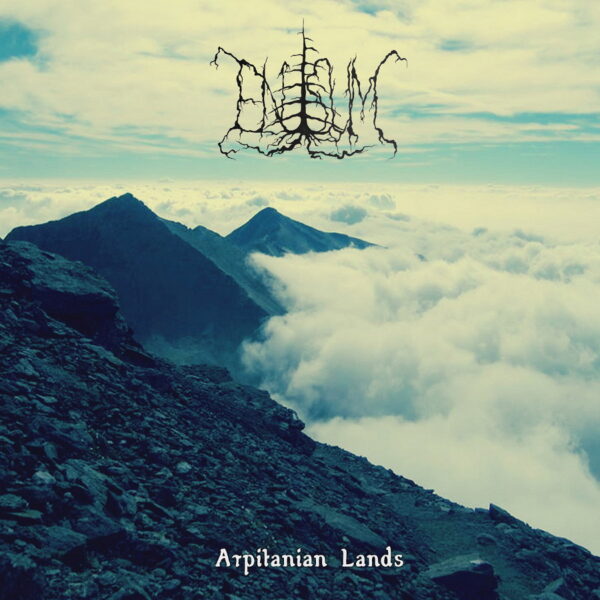 As fans of Italian black metallers Enisum can guess, “Arpitanian Lands” refers to the band’s native Val di Susa homeland which is part of a cultural and linguistic area called Arpitania in northwest Italy and regions in France and Switzerland that border this part of Italy. The album’s themes revolve around the natural environments of Arpitania, its flora and fauna, and the ancient spirits that might still reside in that region and may hold secret knowledge. Listeners might expect to hear quite a lot of ambient and acoustic music along with field recordings of nature-based background ambience but if so, they are in for a surprise: this album is very firmly rooted in raw atmospheric and melodic black metal, similar to the style of Cascadian black metal bands like Wolves In The Throne Room, with many moments of rapid-fire blast-beat percussion aggression and flowing rain-shower tremolo guitar. The sound is very clear and sharp in parts, and frequently has a strong radiant warmth which suits the album’s grand concept and expansive nature. Enisum is aiming high with a brand of epic power black metal.

The nine tracks are quite lengthy and only two are less than six minutes long. My only complaint is that most of the songs are not that distinct from one another and they all might benefit from having slightly more varied instrumentation than what they have which is the basic guitars/bass/drums set-up that does not change much in sound or speed. The crabby shrieking vocals tend to be much the same across most songs. True, there are three or four songs feature both clean and BM-styled vocals but the latter rarely deviates from ranting and screaming harangues.

Title track “Arpitanian Lands” leads off the album and sets the tone and majestic range, emotional as well as musical, through which the rest of the album wanders far and wide. The mood goes from aggressive to triumphant and proud, almost to the point of swaggering, and even quieter, steadier moments (usually coming at the beginning of tracks) are rarely less than joyful and defiant in attitude. An early stand-out track is “Chiusella’s Waters” which, with combined BM rasp and a chorus of clean female vocals, gives an impression of Abba-meeting-blackened-shoegaze. That surely is one interesting experiment Enisum could pursue in the future. From then on the album speeds right through to the end with rousing songs of majesty and drama.

While long-time fans of Enisum will love this album for its power, drama and epic qualities, I must admit that for all its expansiveness and high ambition the music did leave me cold. As the album continues to the end, succeeding songs fall into a similar groove, starting quietly with strong blues-tinged melodies and swelling up quickly into power BM bombast. For me, this is a sign that Enisum might be running out of ideas, which at this still early maturing stage of their career (“Arpitanian Lands” being their fourth album) isn’t a great portent for their future.