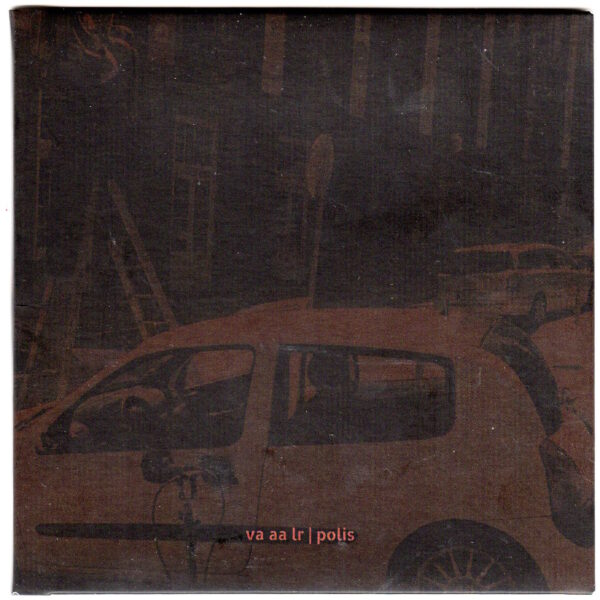 Very good piece of process-art grimness from the trio of va aa lr, who may be known to you as Vasco Alves, Adam Asnan, and Louie Rice. Many’s the time Louie and Vasco have ruined my life with their stern, minimal experiments, some of them released on their own Hideous Replica label in London. Their polis (INTONEMA int014) is an extended installation piece documented and augmented across three long tracks…the original sound art was first created and stored on some playback medium, then loaded into a car stereo system, and driven around the streets of Porto in Portugal during the summer months of 2014.

Whatever happened thereafter to cause any change in the situation has accordingly been documented, and then cross-mixed and spliced with the original source recordings, on this release. What it means effectively is that we hear field recordings of people and the city either adding to or accompanying the brutally minimal sound, which either pulsates or drones or grinds or otherwise inserts itself into your carapace like an unwanted visitor. As ever, the trio of composers do nothing to explain or interpret, just present you with a near-anonymous wall of grey concrete and expect you to account for it. Even the cover photographs could have showed us something about the situation behind this intriguing set-up, but the nondescript images of cars in the street have been carefully printed so that they are well-nigh unreadable by the human eye [1. You may think the above cover shot isn’t so bad, but it’s been enhanced by me using The Gimp.].

At length, assuming you are prepared to subject yourself to enduring this torturous non-music, certain patterns and rhythms begin to assert themselves, and what emerges is much like a sarcastic, reductionist, slowed-down version of what a non-believer thinks Doom Metal sounds like. Ultimately what emerges from all this is an abiding sense of complete futility, because the audience of happy people in the street appear to be completely indifferent to the groaning horrors issuing from that nearby deserted car with its doors wide open, and carry on about their business. Nothing has changed, in other words. Just great! This is what avant-garde art is all about! From 23 March 2015.