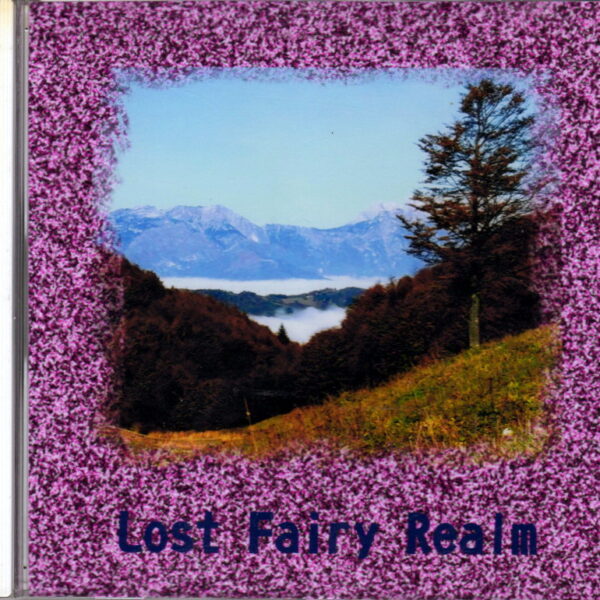 Got a package from Emanuele Lago from his Italian address. Though drummer for the band Ermeneuma, he also goes under a large number of solo aliases to realise dark ambient music in varying strengths and modes, including Tombstone, Immortal Agony, and Black Mountain Chronicles – the latter of which is reserved for sounds of very deep atmosphere, horror, and gothic fantasy. (I’d liken him to fellow Italian Pietro Riparbelli, who has recorded as Tele S. Therion and K11, and is likewise a highly atmospheric and esoteric droner.) Lago’s been active in these areas since the 1990s, but a more recent alias is Lost Fairy Realm. The intention here is to move away from noise and darkness, and present a more ambiguous, quasi-romantic soundscape, and on Lost Fairy Realm (PSYCHOTIC RELEASE PRCD17) he does indeed succeed in creating a series of very understated tableaux, which touch on the enchanted and magical spirits they are clearly aiming to invoke. With titles such as ‘Soap-Seller Fairy’ and ‘Magical Wood’, you might be forgiven for thinking this album will be some kitschy sub-Arthur Rackham fantasy populated with fey creatures not unlike the photographs of the Cottinsgley Fairies. But Lago studiously avoids any such cliché, and for the most part summons a quite unearthly and fleeting sensation in these fragile, wispy washes of sound. No tracks outstay their welcome, and each one presents a compelling snapshot of the faerie kingdom. It’s amazing the King of Elfland allowed him to return with his collected evidence intact.

As Kurai Keshiki, Lago has a foray into a quite different territory. This side-project is only two years old but already has two releases to its credit, the second of which Mozaiku (PSYCHOTIC RELEASE PRCD16) we now have before us. The aim here is to train the camera on landscapes far less sunlit and much more industrialised in nature; urban field recordings are permitted to join the droning and echoing electronics, and after only a few moments of listening it becomes clear that the benign world of the fairies is many miles away. Even so, Lago exhibits the same lightness of touch in assembling his elements, and while the tenor and demeanour of Mozaiku is no doubt threatening and strange, these threats are not delivered in the pompous and moralistic manner we have come to expect from many dabblers in the dark-industrial-ambient genres, who seem to think we’re not paying attention to their messages of doom unless we are forcibly clubbed around the face and head with an iron bar of grinding sound. Again, “understated” is the key word, and it feels like Kurai Keshiki is not only able to imagine an entire world in sound, he’s also intent on exploring it in some detail, doing so methodically and rigorously. The long track ‘Katachi’ is especially mesmerising, gently moving the listener around many labyrinthine aspects of this dark and unknown land, sometimes through tunnels and catacombs, or overground through bleak ruined parklands and near-deserted cities. All is enveloped in a grey crepuscular mist that makes everything seem unreal. What’s encouraging is that he is able to do this without coming across as overly solemn or pretentious. From 28 August 2015.