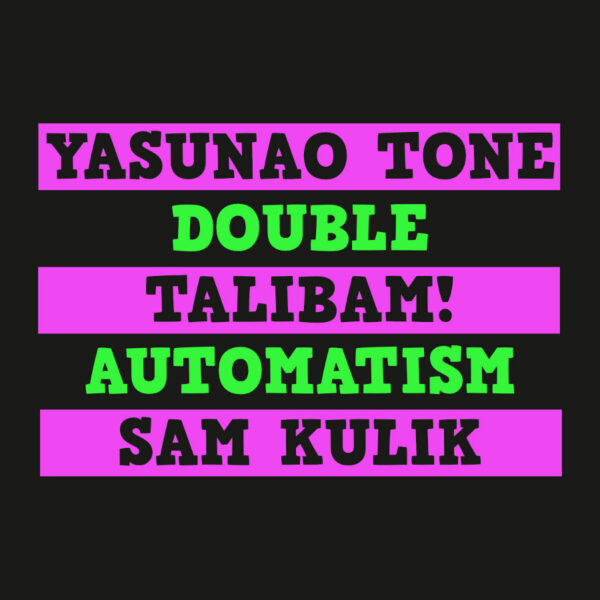 We first heard from Talibam! when we got a copy of Boogie in the Breeze Blocks from ESP-Disk in 2009, where the high-energy craziness of the duo was too much for this pair of ears to digest; we fared a little better when they teamed up with PeeEssEye in 2010, where the collaboration resulted in a rip-roaring epic of demented psychedelic improvisational messiness. Talibam! – the NYC duo of Matthew Mottel and Kevin Shea – are one third of the agency that produced today’s record, Double Automatism (KARL RECORDS KR022), along with Sam Kulik and Yasunao Tone. The result are two sides of impenetrable, aggressive, dense and hyper-active noise-music-electronic spew that defy all reason.

Some of this is purely computer-generated. Yasunao Tone produced MP3 Deviations #6+7 for the Mego label in 2011, part of his experiments in scrambling the way in which audio information is encoded by software into digital files, and the record was an overpowering listen which defeated this writer in short order. It seemed to be a grandiose piece of process-art gone insane, giving voice to the relentless inhuman logic of the computer. However, let’s recall that Tone is an important veteran avant-garde composer, part of the Fluxus movement in Japan, and a member of Group Ongaku; he has worked in many media, including music for computer systems, treated CDs, and other radical interventions into hardware and software. He was involved in the exhibition Japan 1955-70 in New York which is where Talibam! met him in 2012, and they got on like a micro-processor on fire. The New Yorkers were invited to interpret and play his graphical scores. As to the trombonist Sam Kulik, he has collaborated with the Talibam team before, but can also be found in any number of improvising and avant-garde jazz situations, including with Anthony Braxton.

The encounters of everyone on this record are certainly a match made in Heaven, or other similar empyreal realm of your choice. On it, Mottel is playing the Roland Alpha Juno 1 analogue synth, and the drummer Shea is playing something called MIDI mallet percussion, which sounds like a development on the percussion pads used by Kraftwerk only inflated into a much more violent and abrasive instrument of attack. They combine these forces with Yasunao Tone’s MP3 deviations which he does live in the room simply using a tablet or notebook (and, I would presume, a good deal of preparation). I can only make out Sam Kulik on side two here, but his calming brass drones are very human, and a welcome antidote to the fierce, near-inhuman chattering blip that dominates the space of these two crammed sides. It’s exhausting, but it has substance as well as volume and texture; I’m not experiencing the same sensations of despair as I often do when faced with digital process art, and it’s clear that Talibam! are bringing a lot of passion and intelligence to the work, along with their boundless energy. Maybe they and Kulik are adding a degree of humanity to what might otherwise be a stream of mindless uncut computer information. This listen has also prompted me to revise my earlier cavalier opinion on Yasunao Tone, and I’m intrigued enough to investigate earlier works, since there is clearly a lot of weight to these radical and extreme ideas. From 17th March 2015.