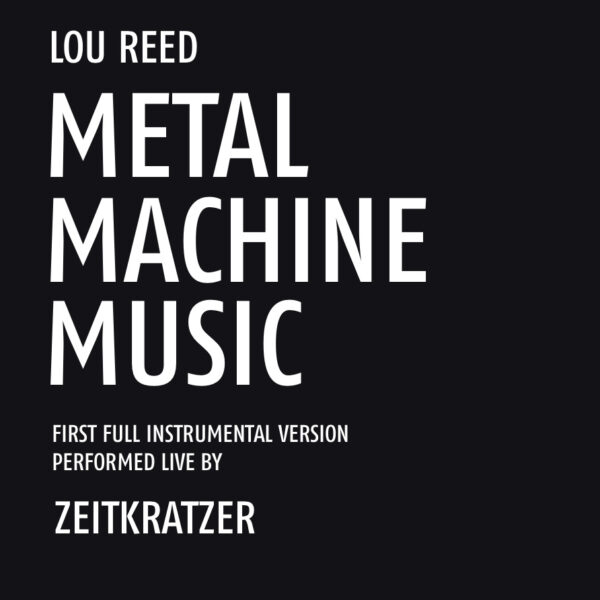 Aaah! Marvellous! Another helping of Metal Machine-related produce hits this particular fan. After the initial revulsion of the buying public subsided, that golden two-fingered salute to RCA in the year of our Lou 1975 has since been championed by the next generation in waiting, who hugged this spectacularly ugly child to its collective bosom like there was no tomorrow (especially those of the Japanoise fraternity). Since then, it’s been repressed on vinyl by the ‘Great Expectations’ imprint (with inferior sleeve art, unfortunately), the c.d. is still on catalogue (at £3.99) as any visit to HMV will attest, and it has become an eminently collectable slice of vinyl. There was even a U.S. import quadrophonic version put out back in the day, which now fetches forty notes!! And it’s been glowering away in the background ever since. The last decade has seen its prickly frequencies reappraised/reactivated by German experimentalists/genre transients Zeitkratzer, where it’s been a regular part of their live set for a number of years. Their Live 2007 dvd/cd combination (on Asphodel) even featured a vignette/guitar endorsement from the very man himself.

There’s one thing that’s always been a mystery to me and that’s just how this beast could be transcribed for a nonet, replete with a string and horn section. I’ve only recently found out that the Ayler’s Wings album had Italian jazz figure Giorgio Gaslini transcribing various Albert Ayler pieces for piano (!!). I’m certain that must’ve been the cause of many sleepless nights, interspersed with bouts of chain smoking and copious amounts of black coffee… but Lou’s monsterwerk must surely be several leagues above that in terms of inscrutability/mystique. Glancing at some of the background notes to the Lou Reed… c.d., recorded at Italy’s Festival Romaeuropa and Festival Aperto, it comes as a bit of a shock to realise that things fell into place on a much more straightforward basis, coming courtesy of one-time ‘Kratzer accordianist Luca Venatucci and his ‘magic ear’; which immediately zeroed in on an open fifth tuning as the very cornerstone of the piece. Easy eh?

After the initial thought that Part One’s opening salvo resembled a Third Ear Band soundtrack for a medieval slasher flick, things eventually settle down into a righteous/sprawling anti-groove, the violin/violoncello and bowed six-string gliding weightlessly in the upper atmospheric register, supplying the ersatz feedback, while the intermittent grind of a sawn double bass provides support for the neo-cocktail pianistics of Reinhold Friedl and the hunting horn drone of trombonist Hilary Jeffrey and trumpeter Matt Davis.

Zeit’s meticulous attention to detail means that Lou’s original timings of sixteen minutes and one second per side are strictly adhered to. And, in closing, we know that sides one and two of M.M.M. were reversed to make up sides three and four. So… Zeitkratzer’s European work ethic sees them soldiering on in this live situation for far longer without studio trickery – twice the fascination!