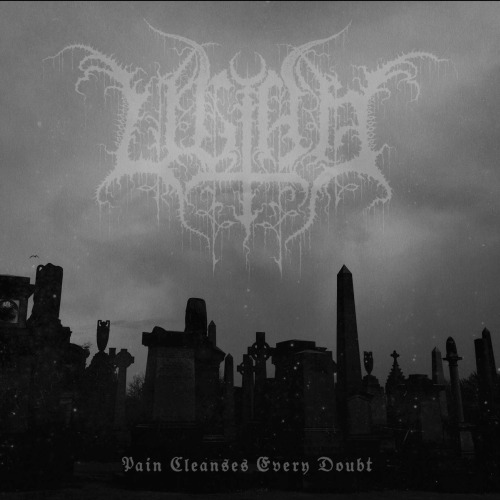 Ultha is a new black metal band from Germany but at least three of its five members have CVs stretching back several years in death metal, sludge, post-metal and other genres. The debut album “Pain Cleanses Every Doubt” reflects this history: while on the first couple of hearings, you hear a lot of hypersonic blast-beat blackened death metal, subsequent outings reveal other layers that lift the album above other depressive BM offerings that might happen to incorporate elements from death, sludge and post-metal.

“Crystalline Pyre” as its name suggests is the portal through which we descend into a world of raging blast-beat fury, fissures within which might reveal a dark detour into depths of surprising jewel-like black beauty similar to what exists in Deathspell Omega’s music (for those of us who still miss that band), presided over by ragged screaming vocals. Instead of DSO’s dense lyrics, sharp precision and sometimes jazzy rhythms, Ultha chase a more punishing style of thick slab-like bass crunch riffs and a monstrous juggernaut sound.

“Perpetual Resurrection” is a mighty monster of doomy blackened sludge metal that starts with a sombre passage of stark stillness just before the avalanche of sledgehammer guitar horror crashes down around you. For all the howling metal thunder and crazed riffing that follow, the track has moments of wide expansive atmosphere and clarity. “Death Created Time to Grow the Things It Kills” might be the first and last word in painful depressive sludge BM … the Ultha fivesome make sure you really feel the pain. The track piles on the anguish, the bleakness and desolation along with the intensity and, to be honest, a fair amount of self-indulgence in the extended instrumental parts, the slurping death metal vocals and dense lead guitar howling. The last track is something of a disappointment as a shouty and chaotic mess.

The middle tracks are much better than the first and last songs which try to channel DSO in a blunt-force way. Ultha are at their best when they balance the extremes of their musical range. Quieter moments in which you are forced to face your demons complement and contrast the louder, crashing slabs of monster guitar and nuclear-powered percussion. This contrast is something the band should emphasise more in future recordings. The guys should also consider a more varied vocal approach with more death metal vocals and maybe a clean-toned vocal, as what they currently have is drowning beneath the dense ferocity and epic nature of the music.

Even though the album has its ups and downs, the force and power Ultha deliver is so immense that in future years this recording might be regarded as a classic album of its kind.