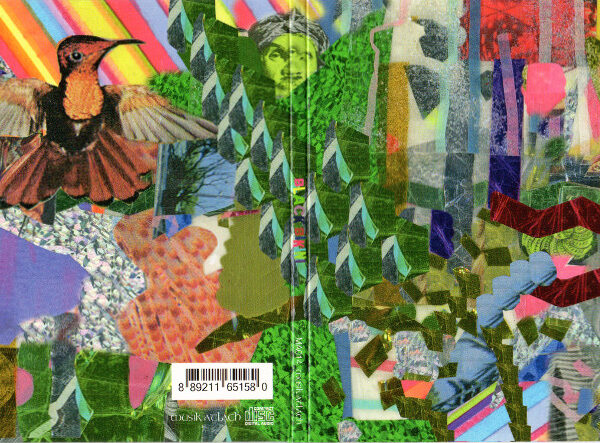 Disjointed and pallid Finnish junky-noises from Black Bikini on their self-titled album (MUSIK ATLACH MA014)…Black Bikini is a team-up of Pentti Dassum and Jonna Karanka, both of whom are already quite well-established in the Finnish music world. Jonna K. (sometime member of Avarus) is somewhat familiar to us with her solo work as Kuupuu, which although often noted in these pages has never really connected with us as a solid proposition, its vague and fleeting tones failing to describe anything much other than a wispy impression of things that can’t be communicated successfully. Dassum is a new name here, but he’s also known as Umpio and has played percussion, bass and noise in other Finnish bands. In Black Bikini, he’s banging his amplified junk metal, while Jonna is strumming listlessly on an electric guitar.

All the music production was improvised and utterly “free”, in the sense of no plans or pre-conceived ideas between the pair as they curled up for several weeks of cosy music-making in Pentti’s studio, hopefully fur-lined or equipped with tasteful wood panelling. The actual noises they made may be less relevant than the post-production process, an activity which was in the hands of Pentti Dassum and is playfully described as “carefully connecting the sounds together with his magic paw”. But the end results fail to cohere for this listener. I can discern little or no rapport between the two performers, so the original source material is not very strong to begin with; and any subsequent process-based transformations that have taken place are weak and insipid, reducing each sound to a series of dull tinkles and tepid watery drones. There’s clearly a subtle structure at work here that I am missing, since all I hear are muffled traces.

Given that considerable care appears to have been spent in creating each piece, I think we’re entitled to ask for a little more in the way of concrete moments, collisions, tensions…you know, old-fashioned dynamics which can make music interesting to listen to.