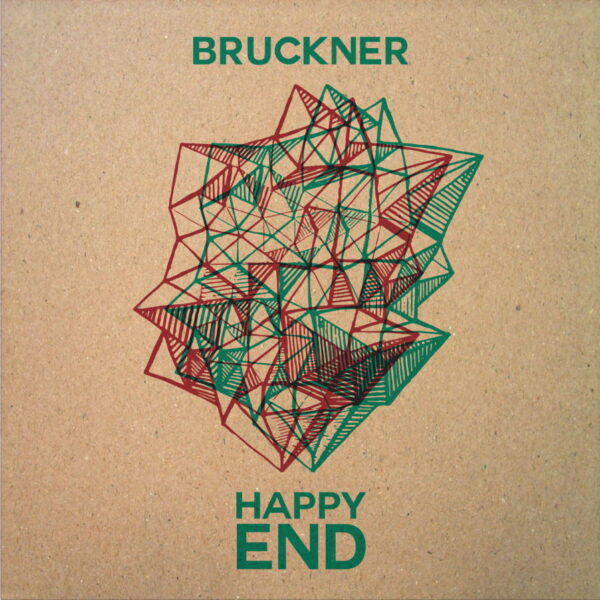 On Happy End (MOOZAK MZK#009), we’ve got an unusual team-up between the electronic musician / sound artist Bernard Loibner and the vocalist-performer Didi Bruckmayr – the duo call themselves Bruckner and 100 copies were made of this vinyl EP documenting their studio exploits, with occasional sinister purring toots from Karl Maier’s bass clarinet on one track.

Bruckmayr’s apparently quite a colourful and eccentric fellow in the Austrian underground music world, cutting an unmistakeable dash with his shaven head, piercings, and full-on body tattoos. From what I can gather he’s often photographed in just his underpants, and performs his oral yawps and yelps in Fuckhead, Wipeout and DDDisco, bands representing various extreme manifestations of electrobeat / industrial power music. There’s always a loopy grin to be seen on his face, and it’s audible on record too. I’ll bet he’s quite a handful if you meet him in the flesh, but his irrepressible antics come over as quite warm and humourous on this particular record, as opposed to the more grim, life-menacing pronouncements of performers like Joke Lanz. Either way, it’s interesting to trace how Viennese Aktionism, once a radical and highly critical art form, has evolved into show-business through characters like Bruckmayr.

Loibner’s musical backdrops are pretty crazy too, full of warped funkoid bass-guitar stabs leaping out in unpredictable atonal ways, and demented electronic fizz leaking out from his digital-analogue set-up. Pound for pound, the record delivers a perplexing and mildly amusing sideshow of eccentricity, rather than a full-on Dada-inspired shrieking assault on bourgeois values; the studio setting may have sapped some of the force from their performances, but it’s hard to say quite what the intention of either party was. I can’t quite make out the “sound poetry, alien creatures and bald landscapes” of which the press notes speak with such conviction. From 23rd October 2015.