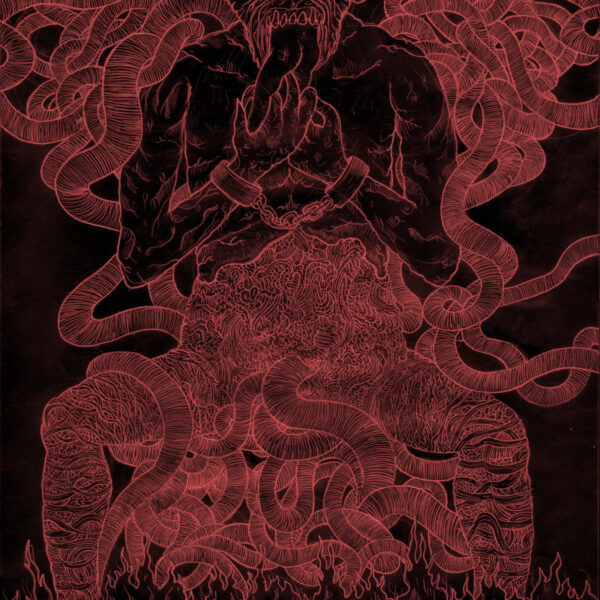 We’re just a couple of months into 2016 and already there’s an early contender for Black Metal Album of the year in US band Skáphe’s second release “Skáphe2”. This offering follows on from the first self-titled album with more hellish and punishing BM psychedelia fusion soundscapes. Howling banshee off-key guitars, insane pounding blast-beat drums and demon voices screaming and growling away, all in a deep underground pit from where there is no escape and no hope of ever escaping, dominate the recording from start to finish. Everything is shunted through layers of reverb which have the effect of running and bleeding the different sounds and textures created by the instruments into one another and all coagulating into one might formless and fluid giant monster amoeba that steam-rolls everything into flatter-than-flat schnitzels in its path. For all that, the sound of the entire album is amazingly clear and each and every instrument has its 15 minutes of fame under the, er, spotlight in this sprawling cloud denseness.

The music is cut up into six tracks but it’s best experienced as one continuous freak super-hurricane force of nature that tears up and destroys everything it touches. Occasionally there are brief moments where near-stillness reigns, the bass rumbling for a while, the screaming lapsing into quiet for once, but even these oases of brooding near-silence have an uneasy ambience, as any moment the torrent can hit hard like 10,000 tonnes of concrete slamming into you from 100 storeys up high.

The musicians sustain interest in this 36-minute charge into the deepest levels of bleakness and madness by mixing up elements of black, death, doom and dark ambient and by including long fragments of rhythm and riff structures, and bits of melody in search of one another. On some tracks there is a definite groove to the rhythms, as if even in deepest Hell there are demons who retain their old-time rock’n’roll memories. In other sections, guitars transform into long droning doom siren calls and drumbeats crash down continuously like bells tolling for all humanity to march into the black holes of non-existence. As the album continues, extended passages of quietly sinister atmosphere develop and brood over blasted landscapes where even bacteria and other microbes cannot live and thrive. Deep sadness, pain and anguish arise as well.

In the last few moments, the intensity and insanity ratchet up to greater levels, with drums threatening to go airborne at the speeds they go and the multi-voiced demon choirs screaming as they go through a harder maelstrom churn. Eventually it all hits the event horizon and what is left behind is disoriented space flotsam and jetsam.

The atonality of the entire work is what really sets it off and helps give the album a highly immersive quality, as does also the layered and complex if exhausting and suffocating nature of the music. There is a great deal to absorb from this album and it needs (and repays) repeat hearings. Few journeys into the inner hell of a mind gone insane are as terrifying as this one.

The CD version of the album will be released during 2016 by I, Voidhanger Records.