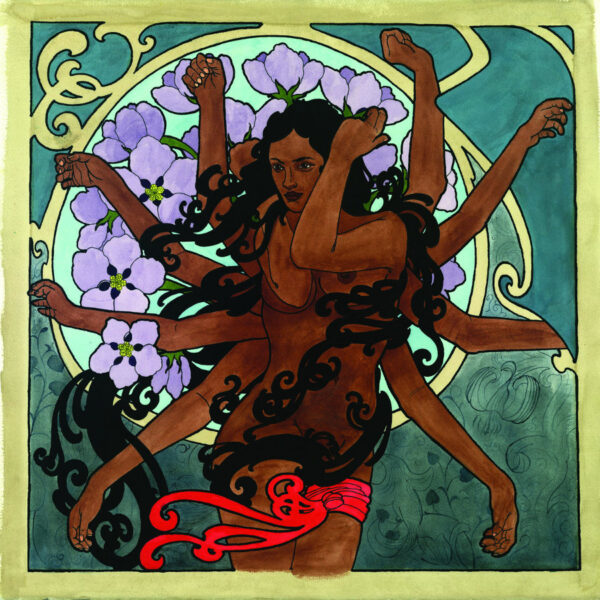 Apart from Oho-offshoot El Sledge (+), White Boy and Tangerine Dream during their last days, a parent/sibling combination in a band still remains a fairly rare occurrence. Another addition to this select group is the father/daughter team of Jess Srogoncik (guitar/bouzouki/theremin) and violinist Alexis Ronstadt who, along with drummer Nick Vega and Emily Schalick (bass) comprise baroque psychesters Larkspurs.

Youth and experience in one package as Jess has a pretty interesting past as a member of Majora recording artists Paris 1942. An outfit known for having Moe Tucker, late of the Velvets, in its ranks – and also being the first port of call (or thereabouts) for future members of the Meat Puppets and the Sun City Girls. In fact, S.C.G.’s Alan Bishop gets a ‘thank you’ in the sleeve notes.

Under the intriguing banner of an art nouveau Bodhisattva (take a bow Christopher Kelm!), this Phoenix, Arizona-based quartet deploys, alongside the Buck Dharma’ed leads of her father, classically-trained Alexis as one of its principal voices in this eight-strong collection of darkly-veiled instrumental pieces. Her poignantly lyrical bowmanship finding echoes in the works of King Crimson’s David Cross and the real creative force behind early Pavlov’s Dog: Sigfried Carver.

Bolstered by supple/rippling bass strings that compliment a dynamic yet measured percussive drive, these ‘live-in-the-studio’ recordings go from a whisper (the chamberesque “Il Gatto Alla Soglia”) to the powerful quasi-prog scream of “Surveillance” with its relentless Crimsonoid (them again!!) six-string/violin lines, to the sublime Arabian filligree that insinuates itself into “Saharan Crepuscule”, a track which transplants an American twang onto Groups Doueh and Interane.

This release shows that this particular East/West baton (in the charge of Tucson, Arizona’s Black Sun Ensemble for some time) has now been passed on after all.